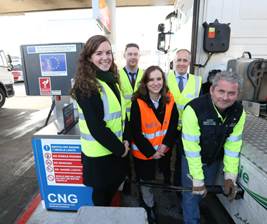 As part of its strategic investment plan to help decarbonise road transport, Gas Networks Ireland has entered into an agreement with municipal waste operator Panda to develop two publicly-accessible, fast-fill Compressed Natural Gas (CNG) stations in Dublin. The two stations will be strategically located with one on the Southside in Ballymount near the N7 and M50, and the other on the Northside in Finglas close to the N2, M50 and M1.

Construction on the project will get underway next summer with both stations expected to be in operation by the end of 2020. The project is co-financed by Gas Networks Ireland and the European Union’s Connecting Europe Facility, as part of Gas Network Ireland’s Causeway Project. CNG is natural gas which has been compressed to fit into a Natural Gas Vehicle’s (NGV) tank and is particularly suitable for use in commercial vehicles. It is a proven alternative to diesel or petrol and reduces transport costs by up to 25% and carbon emissions by over a fifth.  In the future, these vehicles can achieve zero carbon transport when operating on renewable gas. While Heavy Good Vehicles (HGV) and buses account for only 4% of vehicles on Ireland’s roads, they account for 30% of all emissions in the road transport sector.  There are an estimated 25 million NGVs in operation worldwide, and almost two million in Europe. Earlier this year, Gas Networks Ireland launched Ireland’s first publicly-accessible, fast-fill CNG station in Dublin Port with the second station due to be commissioned in Cashel early in the New Year.

Commenting on the deal, Ian O’Flynn, Head of Commercial & Corporate Affairs at Gas Networks Ireland said: “Ireland’s transport emissions continue to rise, while this is the by-product of much welcomed economic and employment growth, as a country we face significant challenges to meet our emission reduction targets. Gas Networks Ireland is leading the development of this new, cleaner transport network, to support Ireland in reducing its carbon emissions and to give Ireland’s fleet operators sustainable energy options.”

Panda (part of the Beauparc Group) plans to commission 45 NGVs as part of their new ‘green fleet’ over the next three years. The move is the first of its kind for a municipal waste operator in Dublin and is part of the company’s commitment to reducing its emissions and carbon footprint across its operations. The first of the new CNG vehicles set to be supplied in early 2020 are Renault Range D Wide 6×2 rigids

Brian Bolger, Group Fleet Director at Panda added; “Sustainability is at the heart of our business and this is a significant step for our company that will keep us at the forefront of industrial environmental excellence. The partnership with Gas Networks Ireland is transformative in allowing us to realise our ambitions in delivering this green fleet.”

CNG for transport is one of the key gas technologies set out in Gas Networks Ireland’s Vision 2050 which outlines how it can reduce Ireland’s total carbon emissions by one third and create a net zero carbon gas network. More on Vision 2050 can be found on: www.gasnetworks.ie/vision2050