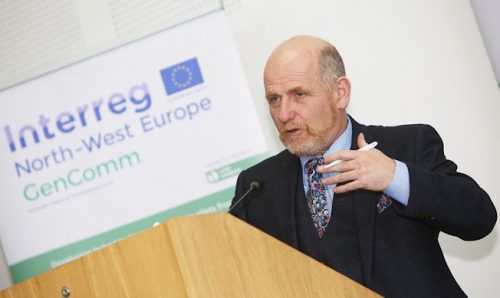 In a unique combination three European hydrogen projects including the Belfast Metropolitan College led GenComm project are collaborating to form the ‘Hydrogen Triple Alliance’ which will further increase a green hydrogen transition across Europe and reduce carbon emissions on a much quicker timescale.

GenComm, Seafuel and HUGE, three green hydrogen projects encompassing Europe are seeking to overcome the issue of how to connect stakeholders, end users, policymakers and communities interested in hydrogen technologies.

The integration of the three projects will lead to major international change and will fast track the sector coupling of renewables, allowing expansion of renewables investment across Europe.

The alliance allows the integration of hydrogen production and use in the energy value chain leading to even more reduction in carbon emissions. With current climatic conditions this is to be very much welcomed. GenComm Programme Manager, Paul McCormack, said: “We must deliver hydrogen equity in order that all of Europe can fully realise the benefits of green hydrogen. This Hydrogen Triple Alliance is the start of a European wide H2 highway collaborating and sharing research, results and ensuring all can reap the benefits of a zero carbon energy system.”

Deislava Todorova, HUGE Project Co-Ordinator from the Environmental Research Institute also is excited about the new collaboration, saying: “We need HUGE solutions for the tiniest and most remote places if we are to realise the net zero carbon future. “

This much called for Triple Alliance will integrate their resources to enlarge the Community Hydrogen Forum (CH2F) http://communityh2.eu/ and in doing so can help deliver more benefits for European communities. The now enlarged CH2F platform will be a hydrogen technologies forum for international, national, regional and local governments, energy agencies, community development groups, energy co-operatives, educational institutions, renewable energy developers, transport sectors and grid operators, where any query about hydrogen technologies can be discussed. Any stakeholder from these regions is encouraged to participate as a member of CH2F. Combining research data from the three projects in the Triple Alliance can also lead to an increase in replication projects as a result of the growing realisation of the place hydrogen has in benefiting all of Europe.

Hydrogen, the fuel of the future, is becoming a reality

The cleanest way of producing hydrogen is from renewable electricity, and that just happens to be where Ireland has significant potential. Just a few short years ago, advocating for hydrogen as a large scale clean energy solution was a quick way to ruin your credibility.

“We were hydrogen mavericks seven-eight years ago,” is how Paul McCormack puts it.
As the innovation manager for Belfast Metropolitan College he has been an advocate for the use of the gas and his role now stretches to programme manager for GenComm, the European hydrogen project, where he is involved in installing Ireland’s first renewable hydrogen facility in Antrim. “With all the work that is going on, we suddenly find ourselves centre stage. Hydrogen is the new word for the green recovery post Covid-19 in Europe,” he adds.

Howard Knott, Logistics & Maritime expert added: “I had no idea how active the development throughout Europe and particularly in Ireland was in this area and how realistic the significant adoption of this fuel could be by 2030.

Two particular points jumped out at me.