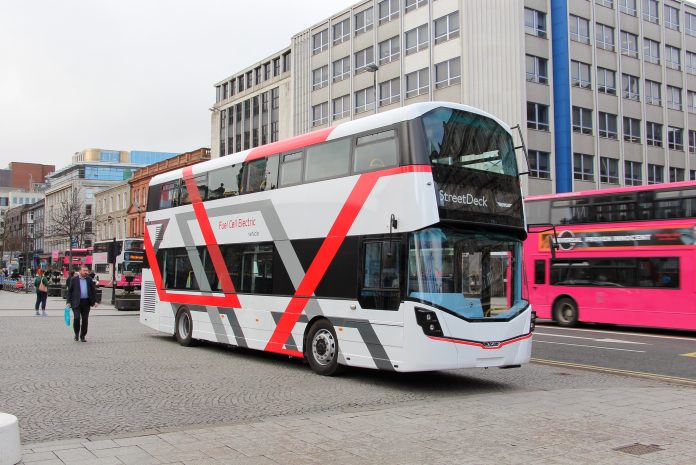 Paul Mc Cormack, Programme Manager on the Belfast Met led renewable hydrogen project GenComm today welcomed yesterdays launch of the Hydrogen Mobility Ireland report ‘A Hydrogen Roadmap for Irish Transport 2020-2030-Hydrogen Mobility Ireland’.
The report from the relatively new industry group is a big move in demonstrating how hydrogen can help in the decarbonisation of the Irish transport fleet. The report presented yesterday in Dublin to Richard Bruton, TD, Minister For Communications, Climate Action and Environment gives the green light to hydrogen vehicles including 30 buses, 50 cars and 10 trucks being on irish roads by 2023.

GenComm are a key member of Hydrogen Mobility Ireland. The Gencomm project led by Belfast Met will develop three pilot facilities fuelled by Solar Power (Germany), Wind Power (N Ireland) and Bioenergy (Scotland) – to produce and store hydrogen. Hydrogen produced from the plants will be used to generate heat, power and transport fuel for the respective communities in Germany, N Ireland and Scotland.

GenComm Programme Manager, and Hydrogen Ireland member Paul Mc Cormack, said: “The GenComm project welcomes the launch of the Hydrogen Mobility Strategy for Ireland. Decarbonising transport fuels and the electricity supply are prime requirements under the Paris agreement. As Ireland plans and develops a successful energy transition away from fossil fuels and towards the widespread use of secure renewable energy supply it will require the exploitation and implementation of existing and new technologies with industry stakeholders/customers having commercial confidence in them. This strategy forms the building blocks of this confidence required by the market and illustrates how Hydrogen can be part of the future green energy mix for Ireland.’

Mr Mc Cormack forsees the hydrogen vehicles in Ireland as being a vital part of the move towards growing a hydrogen economy. GenComm will technically and financially validate renewable H2, and develop a Decision Support Tool (DST) to enable stakeholders and communities to transition to renewable hydrogen.

Hydrogen fuel cell vehicles consume hydrogen as a fuel to produce electrical power for the vehicle, with water vapour the only by-product. Hydrogen Mobility Ireland have set forward the business case and rationale for both the private sector and Government to support the provision of hydrogen fuel cell vehicles.
The report presented yesterday to the Irish government finds that:
· Ireland should follow the lead of countries like China, US and Japan who have committed to each having in the region of one million hydrogen fuel cell vehicles by 2030
· The Government should apply similar incentives to hydrogen fuel cell vehicles as they do to battery electric vehicles currently
· Hydrogen vehicles will be cost-competitive with conventional fuel vehicles by mid next decade. Buses, vans and taxis could be deployed as the catalyst for market establishment
· Recommends building clusters of refuelling stations to give early adopters confidence
· A first deployment project involving two hydrogen production sources and three refuelling stations are presented. This can be done at a cost of €34M, and will require €14m of funding from Government
· By 2030, a network of 76 stations would ensure that 50% of the population of the island would live in a town with a Hydrogen Refuelling Station as well as providing adequate coverage of major roads, while a network of 27 electrolysers collocated with renewable generators (mostly wind farms) would supply the hydrogen fuel
· In a positive adoption scenario this will lead to a national fuel call fleet of 2,000 HGVs, 880 bus/coaches, 6,800 vans and 29,000 cars by 2030
· Hydrogen could abate 300,000 tonnes CO2 annually (2% of transport emissions) with the potential for this to significantly increase in the 2030s. The cost of this abatement would be between €75-100/tonne