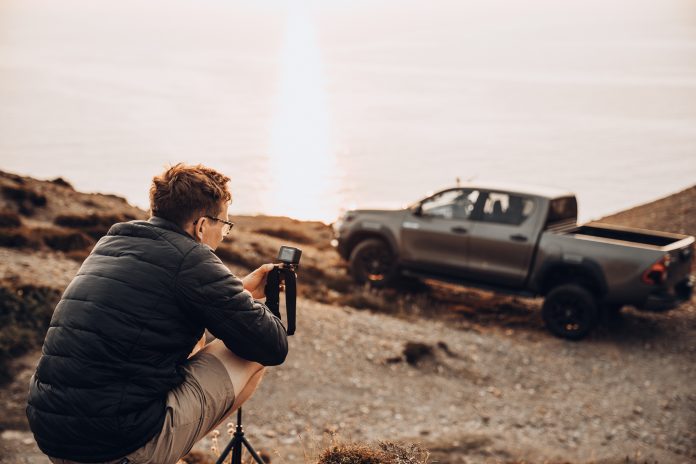 The films are part of a collaboration between Toyota and GoPro to celebrate the launch of the Hilux Invincible. Athletes from GoPro’s European Ambassador programme have created original content showcasing the capabilities of both the Hilux and GoPro cameras.

Werkmeister has been working with GoPro for the last five years, specialising in motorsport film production. His experience includes filming the PWA windsurfing world tour, the Olympics, and ocean racing, so he knows the tricks of the trade for capturing great footage in dynamic settings.

The films show Werkmeister demonstrating different techniques while filming off-road, on the water and setting up a time-lapse video of the Hilux in a clifftop setting at sunset. By sharing his skills, he can help amateur camera-owners get the best results from their kit.

The recently launched new Hilux featured in the films is a tougher, stronger and more capable model than ever before, on any road and in any conditions.  The top-of-the-range Invincible and Invincible X models have a new, more powerful 2.8-litre engine, while every model in the range can carry loads of up to 1,030kg and tow up to 3.5 tonnes. The pick-up’s off-road driving capability has been further enhanced with the introduction of a new electronic limited-slip differential.

“I think GoPro is the best camera to use for video, photo, time lapses, plus it has many more features,” says Werkmeister. “You can place the camera in several places on the vehicle, inside or out, knowing that the right GoPro mount will hold your camera securely.. I’ve attached GoPro cameras to cars and motorbikes, when driving at more than 100mph and personally, I’ve not had one fall off. GoPro produce a range of mounts, to suit a ton of situations, it’s up to your imagination and creativity, to push the boundaries.

“The GoPro HERO9 Black offers a wide range of settings. For all video, I’ll use either 4k 25fps or 2.7k 50fps and shoot in 4:3. The GoPro has a 4:3 sensor and when you use its full resolution, you get no cropping, which means you can have more top and bottom in the shot. When filming in a high resolution, you can ‘zoom in/crop’ the edit, to achieve the 16:9 shot, without losing quality. Currently, most social media platforms will allow 4:3 posting, so it’s rare that I’ll use a 16:9 resolution, unless it’s for YouTube. For non-action shots, I use 4K, which gives me a lot of options for cropping or using a large canvas.

“When I really want to push for some epic slow-motion shots, I use 1440 120fps, which lets me capture amazing slow-motion in a fantastic resolution. I always have ‘HyperSmooth’ on, for super-smooth footage; if the activity needs more stabilisation, simply add the boost on the touch screen. The boost will crop into the image slightly, but it will even out bumps and wobbles.”

Mounting a camera to the Hilux

The Hilux is born for the outdoors and an off-road adventure on challenging terrain is the perfect environment to have fun and get some memorable action footage. Werkmeister advises: “When I plan where to mount the camera, I like to think about what angles will showcase the best of the vehicle. Bonnet, roof, wheel arches, underneath and wing mirror –these are my ‘go-to’ angles. I start with the GoPro Suction Cup, which provides a secure seal to the bodywork. First, I hold the GoPro in the area where I want to position it, checking that the angle is correct, so I won’t have to keep attaching and removing the mount, and I look at where I can securely attach the unit.  All areas with a gloss finish are perfect. The button in the centre of the mount will push all air out of the cup, giving you a really secure mount.

“The Jaws Flex Clip has an amazing grip, and its low profile works well when mounted under the vehicle. You can extend the mount further by adding a goose neck. When using the HyperSmooth that’s built into the camera, you’ll never have a shaky shot. The final mount is the GoPro Adhesive Mount. Whether you use the flat or curved versions, these are waterproof and an easy way to mount the camera on many different surfaces. I use them inside the cab to capture the driver and any passengers.

“If you find the mount hard to remove, one tip is to use the stem of a screwdriver and position it diagonally across the mount and twist. This will push from two corners and the mount will twist off.

“The GoPro is not just an action/POV (point of view) camera, it’s amazing for filming yourself with the car, or grabbing a tripod and placing the camera on the ground or a wall to capture yourself driving. Either place the camera itself on the floor or grab a mount and get the best angle. I carry a mini tripod with my camera at all times. I can throw the camera down and get the epic shot from a new angle, plus I can use the mini tripods to film myself vlogging. The new screen on the front enables you to check the shot, without having to look at the back screen. One tip: activate voice control and then you are hands-free. Just say ‘GoPro start recording’”.

“For time lapse filming, I first plan my angle.  Whether this is on a tripod or tucked away on a rock, it’s completely up to you. After I have my angle, I decide what time interval I want. For shots of people moving in an area, I will use a setting of 0.5 seconds. If I am shooting a sunset, I’ll use between 10 and 30 seconds. You have to remember that ‘frames per second’ is made up of 25 frames, so each shot is 1 of 25, which is 25 of 1 second. It can be very confusing, but once you practise, you’ll know exactly what setting you want before you start. Press the red button and you will start recording. I try to turn off any extra options on the camera, like the front screen, as this saves battery.”

“The HERO9 Black is not only great for filming, but also for capturing amazing photos. One advantage over a digital SLR camera is that you can place a GoPro it in positions that few cameras can achieve. Either take burst (continuous shooting) for those epic action shots, or a single photo to capture a stunning landscape. I like to use the GoPro SuperPhoto or standard setting. The SuperPhoto option allows the camera to select the best settings and give you the best possible photo. I like to use the standard and then play with the settings in Protune, as this means I have full control over the settings. Use the camera in portrait or landscape – remember that portrait is the perfect dimension for Instagram stories.”

“One major tip is to use an external battery charger. Flip the GoPro battery door and plug your USB cable into the power, and the other end into a battery pack/charger. This will keep the GoPro powered for hours and charge the GoPro battery at the same time. It’s ideal for any time lapse filming and will make sure you don’t lose power at a crucial moment.”

When you have selected your location, shot and interval, there are some key settings within the camera which you can access by pressing on the time lapse icon, then the pen icon.

“Living the Ranger Life,” – With the Next Generation Ford Ranger,...