As all look to green mobility as part of the solution to decarbonise transport we must look to green solutions across the entire transport spectrum including marine transport. As such, Hydrogen could well be the  fuel of the future for ferries that operate off two of the most scenic Irish islands. Both the Rathlin Island ferry, the Rathlin Express in Co Antrim and the Valentia Island car ferry in Co Kerry are ready to develop their services in a green economical journey together.

As 2020 draws to a close there are plans afoot in both locations to learn from green energy research and to develop as a consequence. The aim is to address the carbon footprint of the vessels and explore opportunities around hydrogen fuel cells.

Michael Cecil, Rathlin Development and Community Association Chairman, is both excited and realistic about the plans saying: “We aim to explore all opportunities to reduce the Islands carbon footprint, taking each element as close to zero as possible. Retrofitting the current fast ferry with hydrogen tanks, fuels cells and electric drives may well be possible but questions remain unanswered for the operator. These include running costs as compared to traditional diesel, guarantees of hydrogen supply and reliability of relatively new technology. A consortium of local businesses have secured funding to scope out options around ferry transport to and from the Island and hope to go to tender for a feasibility in the next few weeks. “

Renewable and hydrogen options are being explored in a belief that this is the direction to go in for the next decade and onwards. Michael is aware that the island offers the perfect opportunity for stakeholders with a maritime interest arguing: “Rathlin and its ferries are very much on the radar of Artemis Technologies in Belfast.  Artemis has won a £33 million UK Government innovation grant to develop zero emissions ferries in the city, that will revolutionise the future of maritime transport. With further investment from consortium partners, the total project investment will reach close to £60m over the next four years, creating an initial 125 research and development jobs, and leading to more than 1,000 in the region over the next 10 years.

“Representatives from Belfast based zero emission ferry project Artemis have visited Rathlin to evaluate the route and existing ferries. “,

The green direction being taken hopes to achieve the total elimination of fossil fuel usage on Rathlin. Government are giving a lead too with Diane Dodds, the Northern Ireland Economy Minister saying in September 2020, “I see great potential for offshore wind and marine renewables. Not just in bringing forward projects that deliver renewable generation for Northern Ireland but in local supply chain opportunities for projects that will be delivered in UK and Irish waters”.

The Rathlin Express is a 30T, passenger only ferry and can carry 97 passengers during summer months and 38 passengers in winter months. In summer months there is uncovered seating on the upper deck and covered with side opening and indoor seating on the lower deck. Departing from Ballycastle the ferry is an all year round experience and a new green way of doing things shouldn’t create any limits in for example the amount of energy supply. Michael states: “Supply and security of supply is critical to the success of the ferry service. Studies will investigate expected demand and in turn explore how much hydrogen can be produced and retailed locally. With the correct government support schemes linking green hydrogen to transport Rathlin may well be able to satisfy any expected demand. Rathlin is rich in renewable resources and it is only right that local communities take responsibility and ownership of not only their energy usage but production of that energy in the first place.”

Low emission vehicles will now set an example, building on an existing environmental trend. The greater emissions question is always part of the wider green discussion. Michael continues: “A recent Queens University study carried out by a final year School of Mechanical & Aerospace Engineering student highlighted fossil fuel emissions from our ferries as the number one contributor to the Islands carbon footprint.

“The average annual emissions for the island are 2,057 tCO2e (Tonnes of CO2 equivalent) with the two diesel powered ferries responsible for over 800 tCO2e, kerosene.

“Covid apart, as that is clearly having a significant impact on our travel practices, there is a clear trend towards taking environmental concerns more seriously in our everyday practice. Many of us are less satisfied with the apparently small part we can play in our own domestic practices and are looking for corporate and political commitments that can have a bigger and more effective impact.  Transport solutions have often been seen at the level of electric cars and bikes and, while a clear part of the jigsaw, a much stronger impact on the environment can be in tackling the largest polluters, the giants of public transport.  To know that public transport, in this case the ferries and on-island buses, were zero-carbon, non-polluting, quieter, and cleaner would have a significant impact on encouraging other businesses and private interests to play their part.  The trend is strongly in this direction as is seen by the growing attention given to it by the European Green Deal, our own Regional Government’s attention on the Blue/Green economy and the innovative attempts to encourage and strengthen best practice across networks of international islands.”

The ferry service for the six-mile journey from the harbour takes you directly to the wonder of the only inhabited offshore island in Northern Ireland. You can visit for whatever length of time suits, a few hours, a few days or go there to live and become an islander. UTV news recently featured the Stobart family from Cambridge in England who have relocated to live on Rathlin. And according to local estate agents there is a demand from people who now want to work remotely. The island offers its beach, walking trails, play park, gift shops, B&Bs, a bus tour, a lighthouse tour, seabirds and great views. Surely there is now a tourism selling point for Michael when he steers the ferry over to the island in having that new greener ferry service. Michael agrees saying: “The Climate Crisis and related environmental concerns have leapt forward into public consciousness recently, particularly through the work of David Attenborough, Greta Thunberg, and the global climate strikes by young people as well as the direct actions of Extinction Rebellion.  Increasingly, tourists, national and international, are encouraged to consider the environmental impact of travel and recreation.  The pull of experiencing zero emission ferries and on-island transport run from clean, renewable fuels will be a valuable factor in the developing market for tourism that is kinder to the planet.  It will enable us to spread tourism into the shoulder seasons, providing more time and space for visitors to enjoy the tourist destinations and to interact with locals.  Clean travel, already valuable for its own sake, will add a significant educational and ethical attraction to the tourist market and will provide a positive consideration when choosing destinations.  Shifts towards decarbonization of the island, however significant, will be overshadowed unless the largest carbon footprint of the ferries is tackled satisfactorily.  A solution for that would set the scene for any future tourist experience on the island. “ 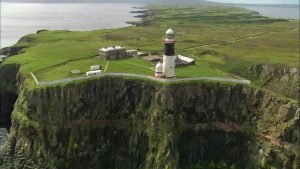 Meanwhile in Co Kerry the Valentia Island car ferry runs a continuous shuttle service from Easter to early October. The roll on roll off ferry takes approximately 10 minutes from Reenard Point to Knightstown. Colum O Connell, Chairman of the Valentia Energy Group is aware of the amount of hydrogen that would be needed to run the ferry saying: “Though the ferry runs for six months of the year, its operated for on average 12 hours each day. It is estimated that 60,000 to 80,000kgs of hydrogen would be required to run an equivalent hydrogen powered vehicle. Our ferry is more than 50 years old. Though not measured we doubt emissions were at the centre of the design thinking of the engine back then. Based on its current consumption, the ferry has a carbon footprint of 160,000kgs of carbon each year.”

Looking now to the next decade Colum is very aware of the green direction we are heading in saying: “We are at an amazing time of innovation when it comes to low emission vehicles. Battery electric vehicles are proving to be more viable for road cars. However, the marine sector up until now has proven a challenge, hydrogen has demonstrated its ability to address these challenges and deliver zero emission solutions. We have seen that green hydrogen can be produced from any renewable source and in theory shore based wind power could be successfully utilised. However with the advent of floating offshore wind technology, and given our exposure to the Atlantic elements, we believe this could be a more scalable option.”

There is the debate of whether the hydrogen to power the ferries could be generated from onshore island wind power. Michael Cecil from Rathlin knows the potential saying: “As mentioned previously there is a desire on Rathlin to take responsibility for the energy we consume. Generating that energy on the island with renewables makes sense and leads to a greater understanding of the impact of energy on the world around us as well as the need to reduce wastage. Income and employment from generation and supply further strengthens the Island community and its pride in all it does. In recent years the Island has adopted the strapline “Thriving from within”, everything we do as a community to reduce harm we cause to the environment fits perfectly with that narrative. “

Paul McCormack GenComm Project Coordinator stated: “Mobility is essential for the development of any community. It is the lifeblood of economic and social activity, enabling people to access goods, services, information, and employment. Mobility for remote island communities is essential especially access to and from the island. Energy security is also essential for the survival of an island community. Security of energy includes the provision of available, affordable, reliable, efficient, environmentally balanced and benign, properly governed and socially acceptable energy services. Energy equity is a constant challenge for island communities. Sector coupling energy and mobility to overcome challenges and deliver resultant advantages using GreenH2 as an energy vector is the nexus of this H2 Marine Mobility work.”

Watch this space for even more movement than usual from both ferries.