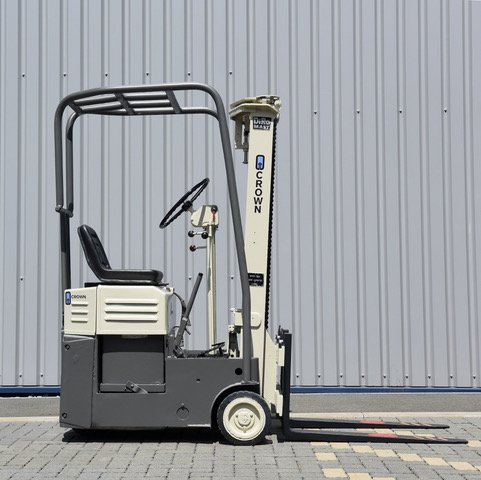 Crown, one of the world’s largest material handling companies, has acquired one of the earliest electric counterbalance forklifts the company produced, being originally manufactured in 1968 in Galway.

Crown entered the European market in 1968 with the purchase of an manufacturing facility based in Galway. Over the next decade, production increased, with the plant becoming the global centre for the manufacture of hand pallet trucks, stacker trucks and electric counterbalance trucks for the European market.

When the first electric counterbalance truck manufactured under Crown’s ownership of the Galway plant recently appeared for sale, Crown Lift Trucks UK acted quickly and acquired the historic forklift. Although noticeably smaller than today’s typical three-wheel electric counterbalance trucks, Crown engineers were not surprised it was still running and periodically in use.

Simon Barkworth, Managing Director, Crown Lift Trucks UK, said: “Crown manufactured this Piccolift truck in 1968. With a lifting capacity of 600 kg and a simple two-stage mast with lift and tilt functions, this is the grandfather to today’s Crown SC Series electric counterbalance forklift. Just seeing the two together shows how far forklifts have evolved, but the fact that at over 50-year-old, this predecessor was still working reinforces Crown’s core values: strong, robust and reliable.”

Today’s Crown SC Series is known for its value and versatility. Available in three-and four-wheel configurations and with load capacities from 1300-2000 kg, this tough workhorse remains true to its heritage, delivering the power, manoeuvrability and dependability to satisfy the demands of both the application and the operator.

“Since the beginning, Crown has manufactured lift trucks designed to last – and that hasn’t changed. Crown designs and manufactures up to 85 per cent of its own forklift components, including motors, drive units and electronic modules – while using steel instead of plastic in vulnerable areas like covers and handles. This ensures we have particularly tough trucks for the demanding applications they face in the busy world of logistics and distribution,” he added.

Things have progressed a long way since the Crown Piccolift rolled off the production line in 1968. Today, Crown manufactures a wide variety of electric and internal combustion forklifts and components in 19 production facilities worldwide. Product sales and service are handled by the company’s extensive network of Crown-owned and independent dealers, with all personnel being factory-trained across all sales and after-sales disciplines.

Since being reclaimed by Crown, the Piccolift forklift has undergone a full programme of refurbishment by Crown engineers and is fully functional and in fantastic condition. It now resides as a permanent heritage display in the reception area of the newly opened Crown Midlands sales and service centre in Birmingham.