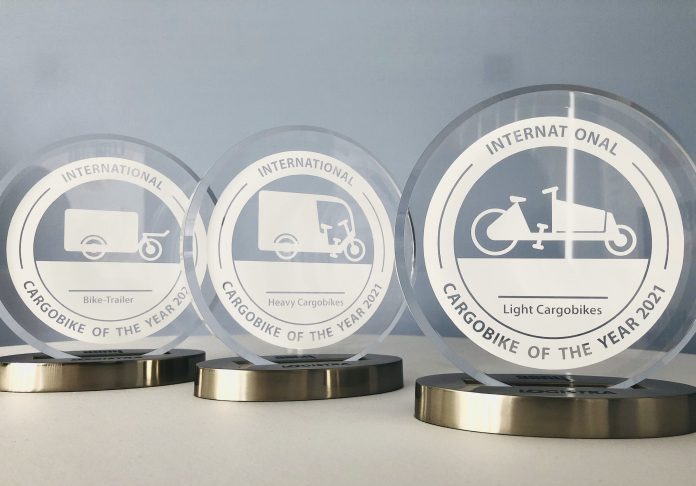 The competition, held for the second time by HUSS-VERLAG, determines winners suitable for logistics in theprofessionally equipped Cargobikes from Vowag (Heavy), eChike Cargo as well as the trailer Carla Cargo.

Intensive tests by an experienced jury of experts on site preceded thefreestyle. After an intensive testingprocedure by an international jury of cargo bike experts, theawards for the “International Cargobike of the Year 2021” were presented at the 2nd National Cycle Logistics Conference in Frankfurt am Main. The awards, which arecategorized in three classes, take into account the trendtowards cargo bike logistics and use in the commercial sector.

The awards, which are categorized in three classes, take intoaccount the trend toward cargo bike logistics and use in thecommercial sector as well and are presented by the tradejournal LOGISTRA from HUSS-VERLAG. “Compared to two years ago, we see a massive innovation surge andprofessio-nalization trend in the industry and had a veritable flood of applications for the award,” explained jury chairman Johannes Reichel at the awards ceremony. This made the on-site test on the grounds of the Frankfurt University of Applied Sciences, which kindly made its campus area available for theextensive test drives and at the same time provided an example of “applied science”, all the more exciting andintensive. Reichel went on to emphasize that cargo bikes arewell on the way to becoming profitable for logisticscompanies in terms of robustness, practicality and cost-effectiveness – even though the acquisition costs are still quitehigh. There are fewer and fewer providers who are trying to bepresent in both the B2B and B2C fields. The trend is clearlytoward a focus and specialization. In the “heavy” category in particular, more and more concepts are entering the marketthat can be described more as “tools” than as “bikes”.

“A Cargobike for everything, as we are used to from theuniversal means of transport, the automobile, simply does not exist. However, there are concepts that, especially in innercities, can outperform motorized vehicles in terms of speed, vehicles in terms of speed, punctuality, space requirementsand environmental friendliness,” added the Test + Technology department head. He also said that the corresponding in decentralized microdepot concepts and decentrally designedcity logistics must be combined without without whichCargobikes make little sense. Participants at the conference in Frankfurt, which was organized by the German Cycle Logistics Association (RLVD), were able to see examples ofthis live on site, for example at CityLog, Cleanffm, UPS Mikrodepot, Sachen auf Rädern, Swobbee and DHL Express.

The winning vehicles stood out for taking a big step forwardand covering a wide range of applications. In the Cargo Bike Trailer category, the Carla Cargo of the further improved2021 model year, optionally with a clever Max Messenger Light CEP body, narrowly came out on top ahead of the„hinterher Transporter“ from the Munich-basedmanufacturer of the same name. In addition to the simple andpractical platform version, the latter also offered a Zarges box solution that is ideal for CEP deliveries. The jury emphasizedthat the two trailers, each in its own right, offer an enormousamount of freight potential at relatively low cost, but in different payload classes. In principle, the combination ofsingle-track, slim bikes and equally slim trailers offers a widerange of possibilities.

With the Light Cargobikes, which are designed for narrowpassage widths, the German manufacturer Hartje took the leadwith its Chike e-Cargo model, which scores points with a universal tilting technology concept and combines agile handling with good payload, compact design and easy maintenance. Behind it, the Rytle triLiner with its robust design and professional package including a powerful Heinz-mann front engine at a fair price rolled across the finish line, followed by the slim, super-agile and even foldable tern HSD, which is predestined above all for food delivery services.

In the “top class” of Heavy cargo bikes, the Vowag Cargo M, designed according to industrial and automotive standardsand based on a four-wheeled steel frame platform, came out on top. With robust components and chassis, it opens upcountless options and cargo possibilities and also offers a favorable price-performance ratio and, last but not least, an enormously powerful e-drive that dispenses with a chain andoperates with a generator and e-motor.

Just behind it, the tricargo Lademeister, a classic three-wheeled bike, crossed the finish line, eradicating many of thefaults of the first generation of cargo bikes and relying on robust motorcycle components, a finely stepped Pinion Cargo transmission, and a fixed and pallet-compatible body – at a reasonable price. Behind it, a pre-series version of theindustrially designed A-N.T. Cargo:4, similar to the Vowag, took third place. It also combines an enormously robust design with very safe road handling, durable components, strong brakes and, above all, a high payload and volume in thespecially designed cargo box. As an “honorary prize,” the jurypointed to the innovative performance of the Austrian brandGleam, whose Escape model straddles the worlds of light andheavy, setting standards in agility and handling with a tiltingchassis, with a decent payload, exchangeable body and fair price.