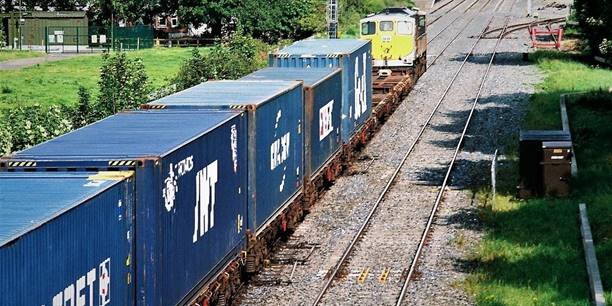 The additional train services, operated in conjunction with Irish Rail/ Iarnród Éireann (IÉ), will see the number increase to nine per week in each direction. IWT commenced using rail for containers between Dublin Port and Ballina in August 2009 with just two services per week each way, mainly to serve the Ballina Beverages soft drinks factory located at Belleek. The supply of concentrate to the factory is still the mainstay of the operation, however additional customers from the medical, retail and brewing industries in the area now also use the service.

The Ballina rail freight terminal is now used as a railhead for the West and North West of Ireland and the adjacent IWT storage facility is used to make regular deliveries to Westport, Letterkenny, Tuam and Castlebar. This yard is used to ‘buffer stock’ allowing customers to store products close to production facilities thereby reducing lead time and eliminating costly storage charges at Dublin Port. Irish Rail recently announced a €1million investment in upland expanding facilities at the Ballina rail head.

The increase in rail freight traffic is due to several reasons, primarily though due to the steadily increasing costs of road haulage making rail more cost effective. The rising cost of fuel and HGV driver wages over the last 12-18 months have resulted in more freight being transferred to rail, the mode being less susceptible to the increases in fuel prices. Additionally, increased shipping through Dublin Port due to Brexit concerns has resulted in queues for terminals and increased congestion by HGVs. Transferring more freight to rail has helped to alleviate the traffic congestion around the port and reducing the terminal queueing times.

Intermodal rail services operating from Dublin Port have experienced a 99% load factor while those from Ballina also have a high percentage. Rail traffic carried by IWT has been increasing by 5% year-on-year. The lower carbon footprint of rail transport is also encouraging some movement from the roads.

IWT was founded in 1981 and is a wholly Irish owned company with offices in Dublin and Rotterdam. In 2003 the then directors successfully launched a management buyout and have operated successfully since.

CILT to host Returning to Work with COVID-19 course