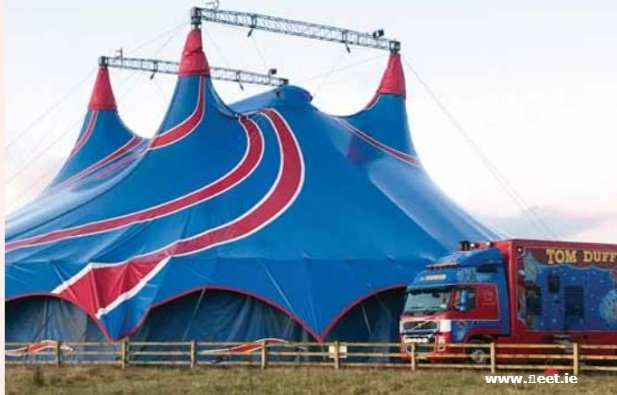 Within weeks of Tom Duffy’s Circus rolling out of Claremorris in Mayo and on to Carrick-on-Shannon in County Leitrim, the whole cavalcade came to an abrupt halt while setting up in Galway. 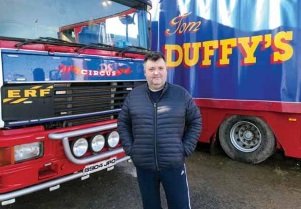 The planned ten-day stay (which occurs on an annual basis) at the City of the Tribes never got off the ground as the Government’s COVID-19 announcement curtailing all public events meant that all performances in Galway were cancelled. As David Duffy stated on RTE Radio 1, the family run firm now in it’s sixth generation and the oldest running circus in Ireland, has never come across such challenging times, having overcome challenges including recessions and ‘Foot & Mouth’ disease restrictions over the decades.

Rewind to earlier in March, when Duffy’s vibrantly coloured truck and trailer fleet were parked up at the Athletic Grounds in Claremorris. David was in upbeat mood, looking forward to improved weather conditions as, having left Ennis, County Clare at the height of Storm Jorge (the Status Red weather warning led to the cancellation of two performances on the Saturday), the forecast was a little better. He had just called his elderly father Tom who is residing in Dublin, and regularly checks in to see how things are going. 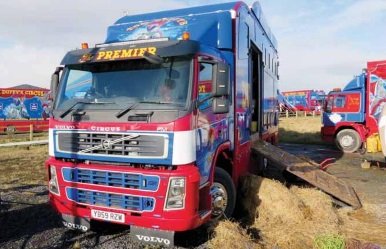 What’s fascinating to truck enthusiasts is seeing a circus or carnival convoy on the road, full of colour with different makes and models towing trailers of all shapes and sizes. In recent times, most of the movements are undertaken late at night in order to reduce road congestion and to enable the platoon to travel more smoothly and closer together. When parked up, one would have to be impressed with the ‘clean’ condition of the various truck models that play such an important role in getting the circus ‘to town’. Keeping the fleet in perfect mechanical order and looking supreme is David’s labour of love.

Over the decades in charge of the circus, there has been a gradual evolution from classic British truck brands to Swedish and French products.

“Yes, purchasing the vehicles is my responsibility and then the customising of them, the designs and the colour schemes were my idea. I played around with a few livery designs for a while and I settled on this about 10-12 years ago. I like to keep it like this now, because it kind of stands out and with the air brushing it’s quite unique. When we are on the road we get a lot of nice comments on social media,” he said.

“In my dad’s day when they used to travel early in the morning, especially with the horse-drawn caravans, times were different and the kids would meet the circus a mile or two outside the town and they would run alongside the horses, but now we travel at night because there are a lot of vehicles to transport and we don’t want to be blocking up roads.” 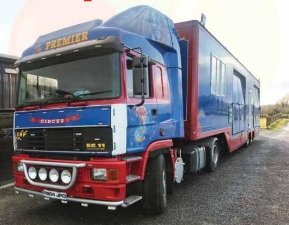 The trucks are intriguing, indeed to some they are just as interesting as what happens inside the ‘Big Top’. Alas, gone are the days when Duffy’s ran Fodens, Seddon Atkinsons and a range of ERF series. “It’s hard to get them now and difficult to obtain parts for them. That’s why we have changed, moved to Volvos and Renaults,” explained David

However, taking pride of place among that fleet of Volvos and Renaults is an ERF EC11, a 4×2 tractor-unit, first registered in 2004. It’s the one truck that David doesn’t wish to replace. “Yes, as soon as a truck starts giving me little problems, I decide to get rid of it because those little niggles always end up being big problems – in the last number of years we have been reducing the average age of the trucks, a lot younger – and that comes with its own problems with everything being electronic and computerised now. I only have one ERF left, and that’s the only  truck that when it’s been giving problems I’ve been getting it repaired. I don’t like throwing money at a vehicle, it’s not cost efficient, but the ERF, nobody wants me to get rid of it, even the show people.” 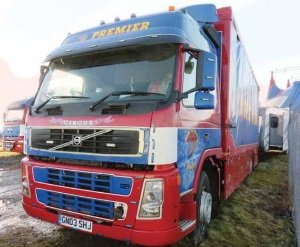 Apart from the ERF and the newer Volvos and Renaults, there’s the odd DAF, Mercedes-Benz and a few MANs with various configurations, mostly 4×2 and 6×2 A quick count amounted to 20 trucks in all.

General maintenance is carried out regularly, checking oil, water, tyres, wheel nuts and something relatively new to David and his crew – AdBlue. “I’m hearing about it all of the time as in recent years SCR diesels have come into the fleet.” This began with the arrival of Volvo FMs replacing the older British marques, to be followed by Renault Premiums, a model David has grown to appreciate with its Volvo drivetrain, fuel economy and value for money. “I have a man looking at two used Premiums at an auction as we speak,” he added.

Attention to detail is to the fore outside and inside the ring, according to David.

“On site, we have our own mechanic operating out of our mobile workshop, equipped with everything necessary to get us from A-B. We can carry out minor repairs up to as far as maybe changing a clutch but after that it’s a garage job.” 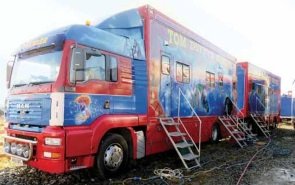 “Tyre management is crucial as any downtime holds up the show – literally.  Virtually every truck and trailer has a spare wheel, with the workshop carrying any odd sized ones required for other vehicles. As the workshop truck and mechanic/driver is always the last in the convoy, he can pick up any problems along the way. His vehicle comes equipped with its own generator and compressors on board with air jacks and air guns, because we have to be efficient, we cannot afford to lose days.”

“What I also have here, which is very important, is our own paint sprayer, so our mechanic does the touching up on site because with the nature of our business going in and out of grounds and getting towed, the vehicles are going to get scratches, bangs and knocks. So weather permitting, as soon as its any kind of scratch or mark happens we try to get it re-sprayed because it’s all about presentation and appearance. I don’t even like to have dirty tyres. If we come off a ground that’s mucky and then we go to a ground that’s clean, I make sure that we wash all the wheels. It’s like having a new suit with dirty shoes. I like the stuff to look smart and tidy.”

Then there’s the trailer line-up which has a broad variance ranging from standard drag box bodies to 5 th wheel motorhomes and caravans. “There’s nothing in our fleet that’s driving on its own, whether it’s a car, 4×4 or van. Some will even have two trailers behind.”

The main logistics trailers are all customised, explained David. “All eight platforms are identical in that we buy the standard chassis and build up from that. Most of the box trailers you see are axle seat stackers in that they fold out for the show attendees to sit on. There is nothing around here that hasn’t been specified, manufactured or adapted to meet our needs. With the trailer chassis, we tried to keep them all the same, with similar running gear, axles, wheels and tyres, etc,” he added.

When moving from town to town, covering 80 venues in a season that begins at the end of January and runs to November, prevention and preparation is key. By habit, Duffys usually configure the parking of the trucks on the site as they arrive. There was a slight delay in getting to Claremorris from Ennis as a tyre blowout occurred along the 120km journey. From practice and experience, this was dealt with quickly, replacing the wheel and tyre in 15 minutes. 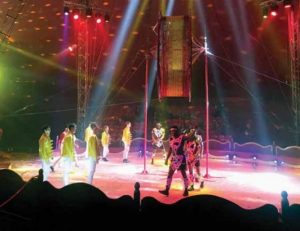 Over the winter period, the fleet is left to hibernate at its County Down facility in Donaghadee. Here, further repairs and maintenance are carried out. A Volvo FM with box body is located there as a spare vehicle, ready to come off the subs bench when required. ‘Retired’ vehicles inevitably end up as scrap, salvaged for spare parts when needed. The whole transport element is seriously underestimated. “It’s more than just the circus that goes on, as you know, logistics is part of the thing that the public don’t see and obviously is not their concern. They don’t realise all the work and expense that goes in. Some will complain about the price of a seat and even though the performance is very strong, they don’t understand the running and operating costs such as the vehicles, insurance, diesel, tyres, etc,” stressed David.

That evening, all the talk about truck nostalgia necessitated attending the show, an event for adults and children alike to enjoy. As per tradition, Lorenzo the Clown welcomed the audience and introduced the various top acts which are drawn from all parts of the globe. One of the highlights was actually home grown as David’s sons Tom and Jamie Duffy performed spectacularly on the “Wheel of Death”. As the huge wheel revolves, getting faster and faster, the brothers run, jump and skip as the bright lights blur. “Jamie is one of only a handful of people in the world to perform a forward somersault on the outside of the wheel,” explained a proud David. “In 2018 Tom and Jamie won the Silver Crown award at the Monte Carlo Circus Festival, the New Generation. In the circus world this is equal only to the Oscars. These Irish boys are now a class act in their own right.” 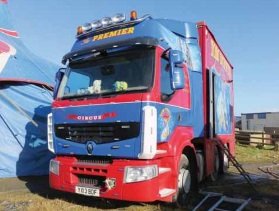 But as the music faded and the lights dimmed, little did we know at the time what lay ahead. The wheels of Duffy’s Circus now lie stationary because of Covid-19, for how long, unknown. “The difficulty is that these people cannot rejoin their families abroad or join another circus troop due to the air travel curtailments. As they don’t have an actual home here, they will have to remain with us but as we have no income, we can only pay them for a short period,” David explained. Currently, staff numbers reach 50, many of them holding foreign passports.

Let’s hope that before too long we can all once again continue to enjoy all that happens both inside and outside ‘The Ring’.