The Freight Transport Association Ireland (FTAI) has issued some more updates on Brexit, and warns that September will see many of the new changes come in to force as agreed in the new EU Mobility Package, it is a short lead in time for operators and drivers. It has also announced a new fuel partnership deal.

Following delays as a result of the Coronavirus outbreak, the European Union Mobility Package passed its final vote in the European Parliament, meaning EU Drivers’ Hours rules will change in September.

The Package covers a range of issues, including operator licensing and the timeline for the introduction of Smart Tachograph II, and also includes measures that bring some vans that cross international borders into scope of operator licensing. Many of the measures will come into effect in a phased basis over the coming years.

o  The existing exemption for “vehicles or combinations of vehicles with a maximum permissible mass not exceeding 7.5 tonnes used for carrying materials, equipment or machinery for the driver’s use in the course of his work” is extended, to include vehicles “delivering goods produced on a craft basis where the transport is not carried out for hire or reward”.

o  Vehicles or combinations of vehicles carrying construction machinery for a construction undertaking, up to a radius of 100km from the base of the undertaking, provided that driving the vehicles does not constitute the driver’s main activity (Art13.1(q)).

o  Vehicles used for the delivery of ready-mixed concrete (Art13.1(r)).

o  A driver engaged in multi-manning may take a break of 45 minutes in a vehicle driven by another driver provided that the driver taking the break is not involved in assisting the driver driving the vehicle.

o   The employer must organise the work in such a way that drivers are “able to” return to the company’s operational centre where the driver is normally based or to the place of residence of the driver once in every four-week period. The employer must be able to demonstrate how this is planned and fulfilled, should it be requested by enforcement bodies. (Art8.8a).

o   Where a driver accompanies a vehicle that is transported by ferry or train and takes a regular daily rest period, that period may be interrupted twice by other activities not exceeding one hour in total (access to a bunk or couchette is a pre-requisite).

The revised rules allow the interruption to also be applicable to reduced weekly rest periods, under the same conditions:

§  Rest period may only be interrupted twice.

§  The interruption cannot exceed one hour in total.

§  The driver must have access to a bunk or couchette, or, with the amendment, a sleeper cabin.

o   A regular weekly rest may now also be interrupted only where the ferry or train journey is scheduled for more than eight hours and the driver has access to a sleeper cabin.

o   It will be possible to exceed daily and weekly driving time by one hour in exceptional circumstances to reach the operational centre or the driver’s place of residence, provided road safety is not jeopardised.

FTA Ireland has produced a briefing note which outlines the changes to EU Drivers’ Hours that will come into effect in September and the other measures which will be implemented at a later date. To request a copy please email aflynn@ftai.ie

Getting ready for the end of the transition period with the UK –https://ec.europa.eu/info/sites/info/files/brexit_files/info_site/com_2020_324_2_communication_from_commission_to_inst_en_0.pdf 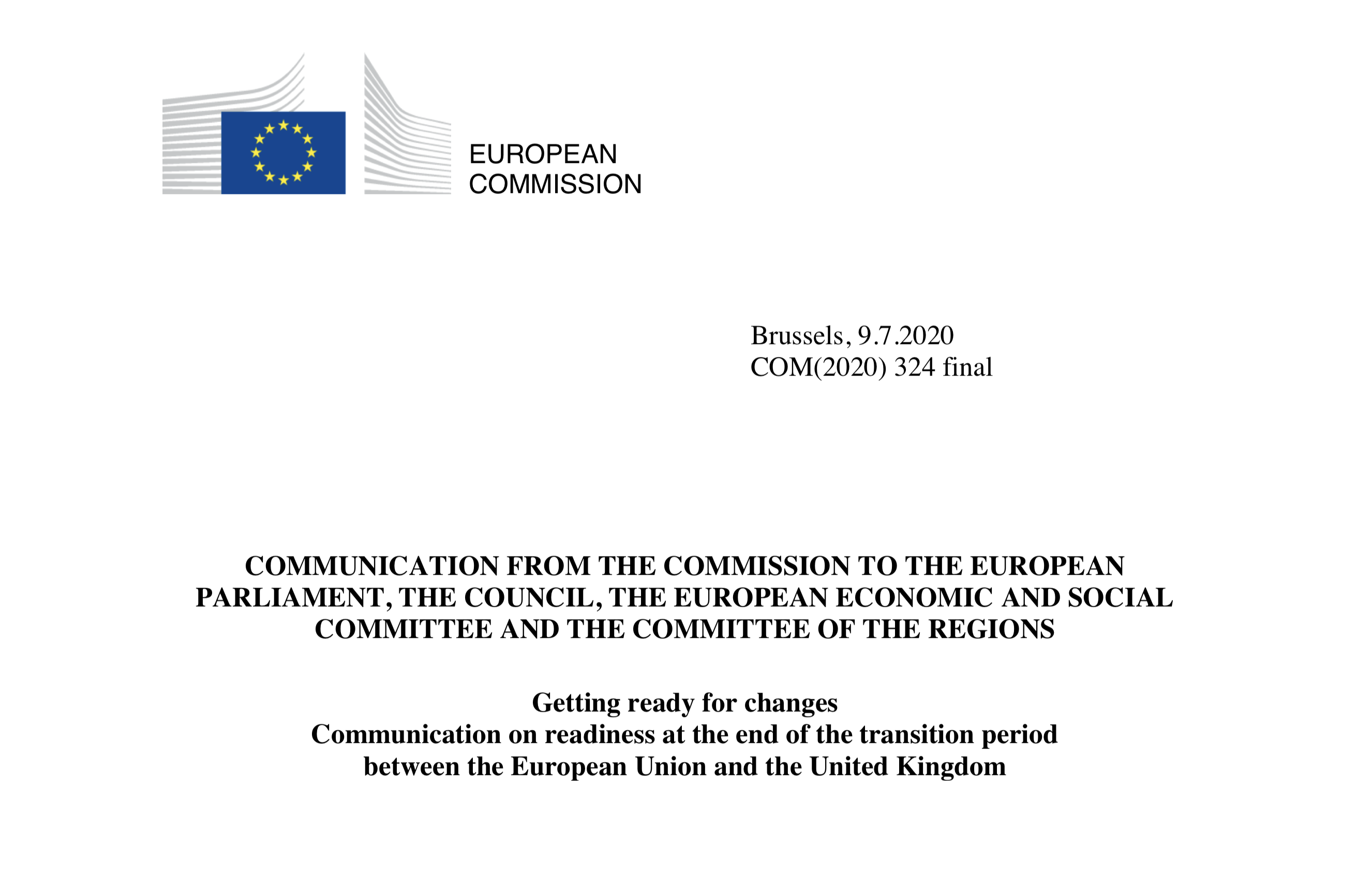 The European Commission has adopted a Communication to help national authorities, businesses and citizens prepare for the inevitable changes that will arise at the end of the transition period (31 December 2020). Changes will occur to cross-border exchanges between the EU and the UK as of 1 January 2021– irrespective of whether an agreement on a future partnership has been concluded or not.

This publications notes (again) that ‘Negotiations so far have shown little progress. Discussions have now been intensified over the summer, with negotiation rounds and/or specialised sessions scheduled each week since 29 June 2020[1]. In this context it is very important that all within the supply chain re-intensify the contingency planning:

o   Agreement with consignors on implications for delayed delivery – this is very important when it comes to food deliveries. Is insurance adequate to cover delays. Do parties are sufficient carriers liability insurance.

It is widely accepted that for confidence to grow that a deal can be delivered the mood music needs to change by the end of July 2020. Progress must be made on the critical key areas of level playing field, fisheries, police and judicial cooperation and the governance issue. If progress cannot be made by then it is increasingly unlikely that a comprehensive deal will be reached in time. With that in mind it is very important that authorities re-intensify their outreach to industry carrying out trial runs of new systems at our ports with the involvement of all stakeholders and publish details of traffic management plans to allow industry sufficient time to prepare.

FTAI has partnered with fuel experts Portland to launch a brand-new Fuel Price information Service with an exclusive discount for FTA Ireland members.

Portland Pricing is designed to make fuel purchasing simple and understandable by giving insight into the way fuel is priced; it covers the full fuel supply chain from refinery rack to forecourt pump, allowing to monitor premiums paid on fuel purchases and accurately set surcharge rates in fuel escalator mechanisms.

Portland information is used by a number of the UK and Ireland’s largest fuel users and has recently been expanded to include dedicated Irish pricing references for FTAI members.

If  interested in learning more about the new fuel service or setting up a no-obligation telephone demo, please visit https://www.ftai.ie/fuel-service or contact Jake Goodall on jakeg@portland-fuel.co.uk or +44 (0) 1904 749073.