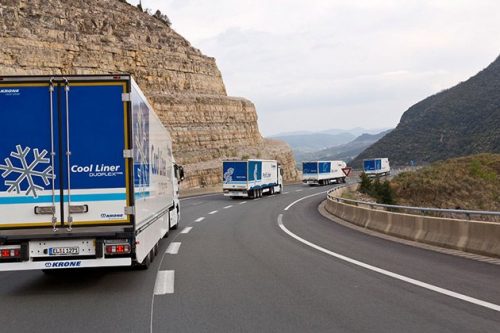 Despite a significant downturn especially in the farm machinery industry and despite less than ideal conditions in the utility vehicle sector, the Krone Group has continued its positive growth trajectory. Although markets remained difficult, the Krone Group generated sales of around 1.8 billion euros in the fiscal year 2015/2016, a result that once again exceeds the previous year’s result (€1.6 billion).

Commercial trailer sales increased slightly over the previous year to 1.2 billion euros, generating 362.8 million euros in the home market (previously €328.0 million), which translates into an increase of 10.6%. The home market continues to be the most important individual market for this business segment and contributed 29.8% to the overall sales revenues. In foreign markets, Krone was able to increase its sales to 855.0 million euros (previous €755.9 million). Sales in Western Europe accounted for 41.0% of overall earnings while Eastern European markets contributed 26.6% (previous 21.4%).

Agricultural machinery sales, too, slightly increased again to €568.6 million in 2015/2016 (from €554.5 million in the previous year). 24.9% of these sales were generated in Germany (27.9% in the previous year), while Western European markets contributed 32.5% (previously 32.2%), North America an unchanged 20.5%, Eastern Europe 10.7% (previously 11.3%) and the rest of world 11.4% (previously 8.1%). The largest share was accounted for by the BiG line products – the self-propelled BiG X forage harvesters, the self-propelled and high-capacity BiG M mower and the Krone big baler and round baler models.

The annual surplus leads to an increase of the Group’s equity capital which rose by 47.8 million euros to 445.3 million euros (previous €388.5 million). The equity ratio increased to 47.8% from previously 45.9% despite a higher balance sheet total. The Group currently has 700.6 million euros (previously €672.4 million) available in the form of medium and long-term capital.
This covers both fixed assets and the entire stock assets as well as many receivables.

Employees
In the past financial year, the Krone Group employed 4,281 people in all its operations around the world (core workforce; 3,097 in the previous year). This figure includes 261 apprentices (previously 220). The substantial increase in staff numbers is attributed to the expansion of the Krone commercial trailers division by merging with Brüggen into Krone Commercial Vehicles. In addition, temporary staff were taken on as full-time employees. This applied particularly to our Agricultural Machinery plant in Spelle.

Investing in future growth
We at Krone continue to regard customer proximity as paramount. For example, Krone’s Agricultural Machinery division set up no fewer than two new subsidiaries in 2016 – one in France and one in China. Also, the decision to move our American headquarters from Memphis (Tennessee) to Shelbyville (Indiana) in the coming years was driven by this philosophy. On the trailer side, Krone opened a new Center in Turkey and is planning to set up new Krone Centers in France and in the Netherlands. Furthermore, we opened the new Krone Used Center in Werlte, Germany, which markets used trailers.
As part of the merger of the commercial trailers division with Brüggen, Krone also announced a significant investment package to modernize and digitize the trailer production sites. About 50 million euros are earmarked for investment in the Werlte production site alone. This lays the groundwork for further sustainable and profitable growth on an international scale and in an increasingly competitive marketplace.

“The milk price crisis and the consequences of the Russian-Ukrainian conflict had a significant impact on the performance of all our business segments,” says Managing Partner Bernard Krone and continues: “In this difficult context, it is an even greater achievement that we were able to increase our sales revenues.” In his view, this success is based on the high quality of the Krone products and the extraordinary innovative strength of the company. “Besides, our customers appreciate our philosophy, which has characterized the life of this family-owned company for 110 years. The values ​​expounded in 1906 by our founder and my great grandfather, Master Blacksmith Bernhard Krone, still apply today: diligence, honesty, customer proximity and common sense,” continues Bernard Krone who paints a positive picture of the company’s future. “Even though we may be anticipating a slight decline in sales for the agricultural machinery business during the current financial year, we are basically confident about the future, because two megatrends of our time – the growth in world population and a globalized economy – are leading to an increased demand for foodstuffs and for freight transport. These factors are bound to have a positive long-term impact on the growth of the Krone Group.
ends.