Home Breaking News Krone has doubled its capacities with the new Dry Liner production at... 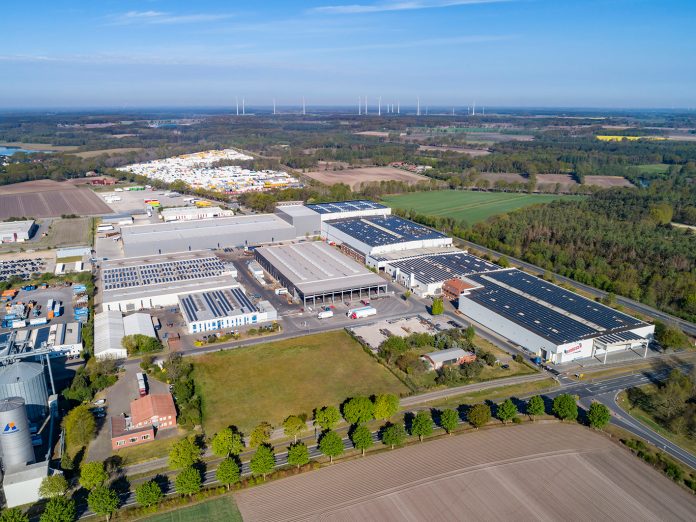 Krone has doubled capacities with the new Dry Liner production at the Herzlake site. Thanks to the use of two new lines, the wide range with numerous equipment variants and options can be manufactured to the highest quality.

Following the start of the new production lines in Herzlake, Krone has ramped up its dry liner production capacity to more than 180 units per week. An investment of 11.3 million euros was made in the site to meet the growing demand for dry freight trailers with two new assembly lines. The Dry Liner with smooth steel body and clinched sidewalls is manufactured on the “STG” (smooth steel body) assembly line. This robust all-rounder with full-sided keyhole plates as standard can be equipped with further equipment and load securing variants, for example with a double-deck device. On the second assembly line “STP” (steel plywood), the Dry Liner Plywood is the next Highrunner to be produced. Here, too, the Plywood sidewalls can be combined with all the standard equipment variants available on the market. Thanks to the flexible modular system, other body types such as lightweight plastic sidewalls and sandwich panels are also possible on request.

All body types are equipped with a steel roof as standard, but can also be combined with a translucent plastic roof or an insulated roof if required. The Dry Liner thus always offers the right solution for everyday transport – whether for general cargo, CEP companies (courier, express, parcel), moving and furniture logistics, or the textile industry. In the course of close cooperation with customers from a wide range of industries, Krone has developed a multitude of functions and practical details for a wide variety of applications over the years.

For particularly theft-prone goods such as cigarettes, electronics and perfume, the Dry Liner STG with its double-walled forklift collision protection and galvanized steel smooth-wall cassettes is the ideal solution. On the other hand, anyone transporting temperature-sensitive goods such as varnishes and paints is on the safe side with the Dry Liner SDK LI with light insulation. In addition, the Dry Liner not only ensures that the goods arrive dry, but also always communicates the trailer’s location and other vehicle- relevant data thanks to Krone telematics.

In view of this variety of options, the requirements for the two new assembly lines “STG” and “STP” in Herzlake, which run parallel to each other, were correspondingly high. The STG line is designed for a capacity of 100 units per week. Here, steel-walled box bodies are produced, the superstructures of which are prefabricated and painted as a whole. Using a computer-controlled crane system, these box bodies are accurately fitted onto the chassis provided and bolted to the chassis.

On the STP line, where the other versions of the Dry Liner are manufactured, the crane-supported side panel installation stands out as a special highlight: The panels, which can be up to 13.6 m long and are made of plywood, plastic or foamed sandwich, are inserted in one piece. The aesthetically smooth outer surface of these sidewalls is not interrupted by any supporting structure, can be perfectly labeled in the customer’s desired design, and is easy to clean, just like the steel smooth wall structure. This line is designed for 84 units per week.

Krone uses a driverless transport system for order-picked line supply, which takes over essential material supply tasks directly in the assembly area. New paths are also being taken in gluing technology. Pre-assembly of the GRP and ISO roof variants is now carried out using an automated gluing table. In addition, the capacity of automated sidewall production has been doubled by the addition of a further gluing table.

Sascha Kwiecinski, Factory Manager in Herzlake, says of the challenges: “The new assembly lines focus on work ergonomics, occupational safety and increased efficiency. This can be seen, for example, in the new ‘Krone screwdriving technology’, which is characterized by battery-powered screwdrivers and a targeted screw drop design. The entire product range had already been fundamentally revised in the run-up to the fair in order to further enhance quality and further increase customer benefits. Numerous robot production lines were also implemented as part of the extensive automation.”

In addition to Dry Liners, Krone also manufactures swap bodies and swap flatbeds as well as CEP vehicles for courier and express trips at its Herzlake site. A key quality feature is the extremely robust corrosion protection provided by the KTL-plus powder coating for the chassis – up to a length of 16 m, a height of up to 3.2 m and a width of up to 2.6 m.

Herzlake is also home to Krone’s automated component production. Components such as rear doors, end walls, drop sides as well as center and corner stanchions for the entire Krone vehicle program are produced in the robot-assisted production facility.

Commenting on the double-digit million investment in the Herzlake site, Managing Director Bernhard Brüggen says: “Due to the very positive demand for interchangeable systems and Dry Liners, Krone has significantly increased production capacity at the Herzlake site. Our Dry Liners and our swap systems stand for high product quality combined with numerous innovative load securing solutions and are therefore in high demand.”

The total area of the Herzlake plant covers around 352,000 square meters. In summer 2021, the next expansion stage will be reached with the relocation of swap body assembly to the new hall. This assembly line has also been completely redesigned.