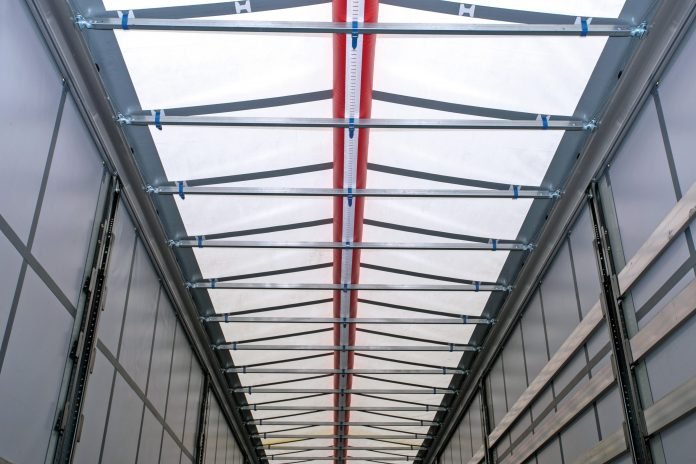 Frosty temperatures quickly lead to snow and ice on the tarpaulin roof – every driver knows this problem. This is because the removal of all ice and snow residues from the vehicle roof and the trailer tarpaulin, as required by law, is a dangerous matter on the road and often difficult to carry out in practice. Only in a few cases are tools available at rest areas that the driver can use to remove ice plates before setting off.

“Falling ice slabs from truck roofs are not only dangerous, they are a major problem for haulage companies every day in winter. The Krone Ice-Protect system preventively prevents snow and ice from forming on the roof tarpaulin. The system increases the traffic and operational safety of the fleet and thus the safety of all road users,” says Dr Frank Albers, Krone’s Managing Director Marketing and Sales.

The driver can directly control the Krone Ice-Protect system via a control panel attached to the front wall of the vehicle. Then an air hose located centrally between the roof tarpaulin and the crossbar is filled with air from the on-board compressed air system and the roof tarpaulin is raised by about 175 mm. This forms a kind of saddle roof so that water and snow masses slide off the tarpaulin when the vehicle is stationary. This counteracts possible ice formation.

The filling time after activating Krone Ice-Protect is about 90 seconds. Before driving off, the hose lowers again at the push of a button or by actuating the brake, and the tarpaulin roof returns to its original state – free of snow and ice.

The Krone Ice-Protect system is available for all curtainsider semi-trailers, but can also be easily retrofitted.