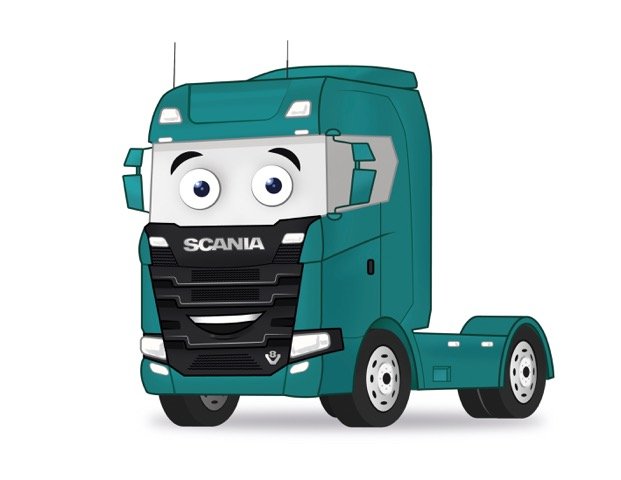 Exciting news from the Vroom-Town series of children’s books – not only is there a new book with a wonderful new character, but the new title is a Scania Official Licensed Product and the new character is an actual Scania truck!  Vroom-Town is a wonderful place where all types of trucks live, work, play and have exciting adventures! The books are written by Marketing Manager of McElvaney Motors, and award winning author, Emer Conlon. 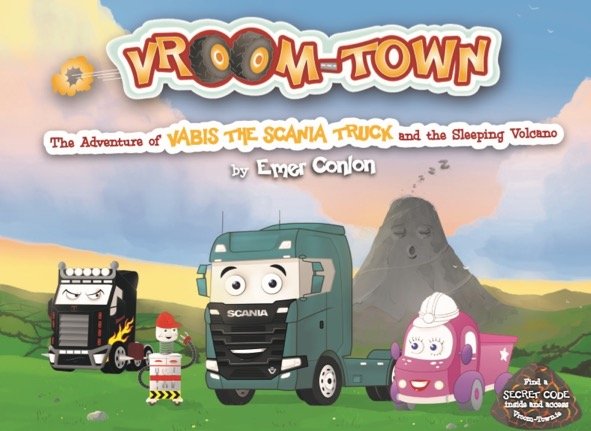 Entitled‘The Adventure of Vabis, the Scania Truck and the Sleeping Volcano’, the new Vroom-Town book is a real page turner for boys and girls alike! When asked how a Scania truck came to join the cast of characters in Vroom-Town, Emer explains: ”My journey has a bit of a background story to it in that the initial idea for the books came from my day job as Marketing Manager of a Scania Dealership  – so it has come full circle almost! I approached Scania in Sweden directly to see if they would have an interest in Vroom-Town. The team really liked the books and the fact that they are portraying a very positive message for trucks – as well as encouraging children to read – caught their attention. So I can officially announce that my latest Vroom-Town book is a Scania Official Licensed Product. It is an absolute privilege and very humbling that such a successful,  global company has considered a Vroom-Town book worthy of being a licensed product.  There hasn’t been any product offering like this from Scania before, so it is very unique.  I am beyond excited about this opportunity and particularly as it is a platform to a very global audience – the potential for this latest book is enormous. I am a little bit proud that having worked with a Scania Dealer for 19 years, now one of my books will feature a Scania truck!,” she said.

Emer continued: “The new character name, Vabis will mean something to people who are familiar with the history of Scania. However for those that aren’t, Vabis was actually the name of a Swedish company that initially produced railway carriages and then moved into automobiles and truck production. They merged with Scania in 1911, forming Scania-Vabis and this remained the company name until 1968 when the Vabis name was dropped. When thinking of a name for the Scania truck, I thought Vabis would be a nice ‘nod’ to the history of Scania and it is also a name that children would take at face value.”

As with the other five books in the Vroom-Town series, the new book  deals with social issues such as bullying and the importance of friendship and kindness, as well as taking the children on a terrific adventure!  All of this means it is an excellent purchase for girls and boys aged 2-7 years. The books are linked with an interactive website, www.Vroom-Town.ie where children can play exciting games, enjoy word puzzles, jig-saws and colouring. There is also an ‘as Gaeilge’ version of  the website.

“Scania trucks are known as King of the Road, hopefully now, with Vroom-Town, they will also be King of the Book Shelves,” concluded Emer.

The Adventure of Vabis, the Scania Truck and the Sleeping Volcano is currently available in all bookstores nationwide and Roe River Books (Park St, Dundalk) and, as well as from the website www.Vroom-Town.ie, andAmazonand other online retailers.  To celebrate the launch, Emer will be doing a number of Book-Signings, Events and Storytimes, check-out the Facebook page for details: www.Facebook.com/VroomTownBooksor visit: www.Vroom-Town.ie