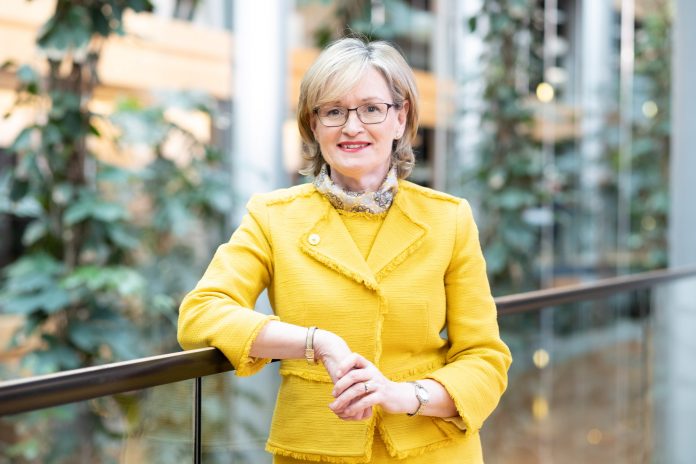 On Wednesday 1 July, Mairead McGuinness, the First Vice-President of the European Parliament, who represents the Midlands-North-West constituency in Ireland will open a leading Belfast Met organised European hydrogen webinar.

Ms McGuinness  will welcome the ‘Hydrogen getting the green light, driving Europe’s green recovery’ webinar organised by the Belfast Metropolitan College led European hydrogen project GenComm. Looking forward to next weeks event Ms Mc Guinness said: “The European Union wants to lead on tackling climate change. There is this important role for hydrogen. I want to say a word about GenComm. I think this is a really important initiative as it will increase public awareness about the role of hydrogen.”

The key industry speaker at the webinar will be Dr Iain Percy, OBE, The Chief Executive of Artemis Technologies who will speak on the topic ‘Zero Emission Energy, The Catalyst for economic growth-Marine H2 Mobility. Iain is a four time Olympian who is passionate about protecting the oceans. He founded Artemis Technologies in 2017, with a mission to see how America’s Cup technology could play a part in the decarbonisation of the maritime industry.

Ms McGuinness is a member of the European Parliament’s Committees on Agriculture & Rural Development, the Environment, Public Health & Food Safety, and Constitutional Affairs. A Member of the Parliament’s Committee for overseeing the Brexit process (AFCO), she has strongly defended EU interests with regular media appearances. She is chair of the Parliament’s working group on the administrative consequences of Brexit.
Prior to becoming an MEP she was a well-known journalist, broadcaster and commentator. Ms McGuinness was elected First Vice-President of the European Parliament in January 2017 and was re-elected to the post in July 2019. She has been a Vice-President of the Parliament since July 2014.

The other four speakers at the webinar include Ian Williamson, Director of the UK based energy consultancy Hy Energy and the current President of the European Hydrogen Association. Mr Williamson will speak on the topic, Informing and Enabling Communities, Community Hydrogen Forum, CH2F.
Dr Rory Monaghan, NUIG will present the role of hydrogen as a feasible means of storing and using renewable energy when it would otherwise be wasted. Dr Monaghan has been researching hydrogen and fuel cells since 2003. The topic he will discuss on July 1 is optimising H2 based energy models using Decision Support Tools.
Mark Welsh, Energia Energy Services Manager and project lead for the GenComm wind to hydrogen pilot will present Energia’s Wind to Wheel Zero Emission Transport project. This is a project which will demonstrate how hydrogen can play a leading role in the decarbonisation of transport on the island of Ireland.
Paul Mc Cormack, GenComm Programme Manager and Belfast Metropolitan College Innovation Manager will present renewable hydrogen from the perspective of providing energy security for remote communities. Looking forward to Ms Mc Guinness opening proceedings next week, Mr Mc Cormack, said: “Mairead is fully aware of what we are trying to achieve through the outworkings of the GenComm European hydrogen project. I have discussed with her the outputs of the project which include the development of a Decision Support Tool, the Community Hydrogen Forum and the emergence of Hydrogen Ireland. She is very much a supporter of our efforts in validating renewable hydrogen. Our Interreg funded EU project aims to provide a roadmap for communities to transition to renewable hydrogen based energy for the likes of heat, power and transport. North West Europe benefits and Mairead appreciates how these communities can benefit.”