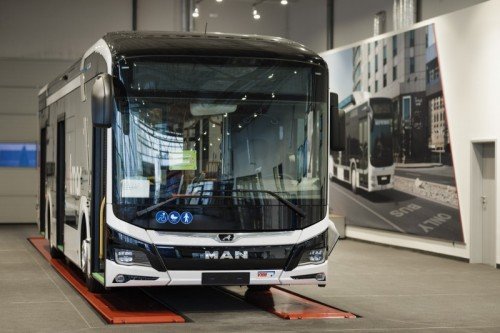 Electrifying Europe: That’s exactly what the MAN Lion’s City E does. Day after day, the all-electric city bus shows what it is capable of and inspires bus operators, and experts alike. Since the first two vehicles were handed over for everyday use in Hamburg at the end of 2019, the MAN eBus demo fleet has been cruising around the streets of Europe – negotiating extensive field trials in scheduled service operation and spending time with numerous customers in countries such as Germany, Spain, Belgium, the Netherlands and France. With series production successfully launched at the beginning of October, these electric buses will now be accelerating away from the assembly line as standard. The Lion’s City E 12-metre solo version will be manufactured during the initial series production launch; the electric articulated bus Lion’s City 18 E will go into production around six months later.

Over the last few years, the company has been preparing the bus production setup and its employees for the challenges of e-mobility with the utmost care.

The all-electric MAN Lion’s City E will be built in a flexible manner in the same production sequence as the other models in the new city bus generation, on a single production line and without any bridging facilities. A great deal of thought went into finding ways to fully integrate the production sequence into the existing setup. After all, on the electric bus, around 30 to 40% of the body shell alone is different to that of its conventional counterpart. Then there is the electric driveline, the batteries and other high-voltage components. As part of the production preparation process in Starachowice, new systems had to be purchased or existing ones upgraded, processes had to be re-engineered and around 3,500 employees had to go through extensive training. All of this in the aid of an overarching objective: To start integrated series production of the Lion’s City 12 E by the start of the fourth quarter of 2020 – with the entire process carried out on a single production line together with the conventional city bus types. And it’s been a rip-roaring success! The very first all-electric, series-produced solo vehicles are now coming off the assembly line to fulfil customer orders. 17 new electric buses are to be handed over to the Hamburg-Holstein public transportation company (VHH) by the end of the year. For MAN, this is the first major delivery to a customer off the back of a tender process. Other cities have followed Hamburg’s suit by ordering the Lion’s City E and introducing zero-emission vehicles into their public transport network. One of these orders has come from Malmö in Sweden: Nobina Sverige AB, Scandinavia’s largest bus operator, has placed an order for 22 MAN Lion’s City E buses. Residents in and around Malmö can now look forward to experiencing these clean and quiet vehicles from the series production plant in Starachowice.