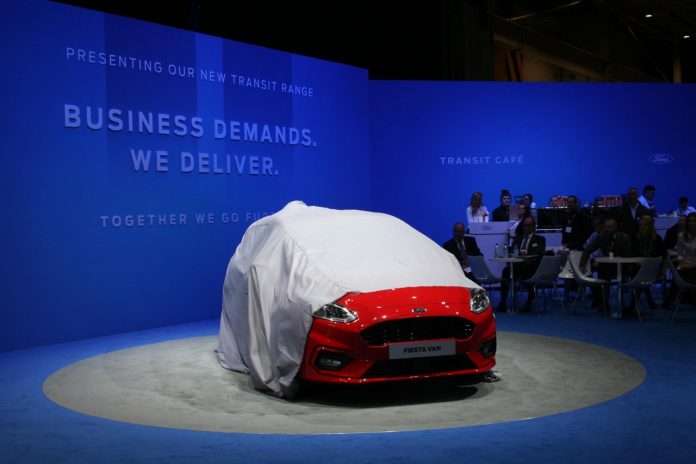 With over 450 exhibitors the recent Commercial Vehicle (CV) Show 2018 recorded another great, sell-out event, drawing crowds of over 20,000 visitors to the NEC in Birmingham.
The venue and event facilitated a number of global light commercial vehicle debuts at the show such as the new Ford Fiesta Van, The Mitsubishi Pajero Sport Van, the Mitsubishi L200 SVP II and the Isuzu D-MAX Stealth by Arctic Trucks.

A surprise presence was with the new Mercedes-Benz Sprinter, on display on the Paneltex stand. The Hull-based converter used the all-new model to show off its first-ever refrigerated body, with the van wearing a camouflage wrap ahead of its official debut later this year.

“With all of these manufacturers using the CV Show as a platform to launch major new light commercials, it proves just how much importance the industry places on the show. It was a delight and an honour to see these companies using the CV Show to make major new product announcements, but of course there was plenty more to the show than just the new vans,” said Rob Skelton, CV Show Director.

From truck, van and trailer manufacturers to fork lift trucks, insurers, tyre companies, telematics, training providers and fuels and lubricants suppliers, the CV Show proved once again beneficial as a one-stop-shop for everyone involved in the Commercial Vehicle sector.
The Workshop and Cool Zones were also popular features, targeted at those working in the van and truck maintenance industries or temperature-controlled distribution.

The dates have also been announced for CV Show 2019, which will be held from April 30 to May 2, returning once again to the NEC. For 2019, the show will place a major focus on the innovation and emerging technology for which the CV Sector is regarded as a critical testbed for the entire automotive industry.