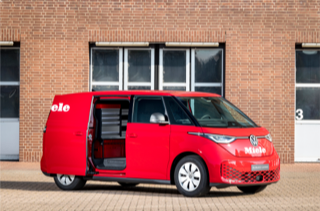 The year 2022 at Volkswagen Commercial Vehicles (VWCV) was dominated by the ID. Buzz – the first Bulli designed as an all-electric vehicle. After the headline-making world premiere in March, pre-sales began in May. Even before the vehicle arrived at dealerships in autumn, customers had already ordered 21,000, clearly exceeding VWCV’s forecasts for the year. By the end of the year, orders for the ID. Buzz Pro and ID. Buzz Cargo added up to 26,600 vehicles. During the past year, 10,800 ID. Buzz left the VWCV main factory in Hannover-Stöcken – 6,000 have already been handed to customers. It has won numerous awards including International Van of the Year 2023 and Irish Van of the Year 2023.

“Our ID. Buzz created a real BUZZ in 2022 – not just here, but all over the world”, said Lars Krause, Member of Board of Management VWCV for Sales and Marketing. “We are very happy with the launch of our first all-electric Bulli from Hannover. Now, our task is to further ramp up production of all models and to deliver the vehicles to our customers and fans.” Krause continued: “In the last few months, we’ve already succeeded in doing this and we’ve been able since September to increase deliveries to customers significantly. In November and December, we sent out 30 per cent more vehicles than in the same period last year.”

With a total of 7,500 electric vehicles delivered, VWCV more than doubled the prior year’s figure of 3,600. The most significant proportion of that was accounted for by the ID. Buzz, with which the company has laid the foundations for the large-scale electrification of its vehicle fleet. “The ID. Buzz marks a milestone on our way to achieving the goal of 55 per cent BEV vehicles by the start of the next decade, a target firmly set in our GRIP 2030 strategy”, explained Lars Krause.

German market grows counter to the trend
Overall, the year 2022 was dominated at VWCV both in production and thus also in units delivered to customers by the impact of the war in Ukraine and the renewed uncertainties in the supply chains. Over the course of the year, VWCV delivered a total of 328,600 vehicles to customers, a year-on-year drop of 8.6 per cent. At 407,400, orders received were once again way above the number of vehicles delivered to customers, and are evidence of the great customer loyalty and high level of interest in VWCV’s current vehicles.

Bucking the downward trend, one market was able to increase both units delivered and orders taken in 2022: in Germany VWCV achieved a rise in units delivered of 8.3 per cent to 98,400. VWCV’s domestic market thus continues to be the strongest individual market in the world. Orders received increased at the same time by 8.8 per cent to 137,400, thus clearly exceeding the previous record figure from 2015. Lars Krause: “The sales team in Germany led by Mathias Busse did everything right last year! In conjunction with the dealers and in close cooperation with our production teams, we achieved a very good result in terms of units delivered and simultaneously set a new record in terms of sales performance.”

Deliveries by product line
In 2022, 10,800 ID. Buzz left the factory. The ID. Buzz has been available in dealerships in the first few markets since mid-November. 6,000 vehicles have already been handed over to customers.

With 142,600 units delivered to customers, the T-series remains VWCV’s highest volume model. Growth was seen once again in the number of California 6.1 units delivered: at 21,600, the previous year’s figure was exceeded by 12.1 per cent.

In summer 2022, the new Amarok celebrated its world premiere, and in some markets is already available to order and in the dealerships. In 2022, a total of 39,800 Amarok vehicles were delivered to customers, already including the first new Amarok in the final few days of the year.

North America: In Mexico, VWCV’s only market in North America, deliveries to customers rose by 38% to 6,400.

South America: The market in South America for VWCV was stable last year. The number of vehicles delivered was 32,200 (-2.2 per cent year-on-year). The largest individual market remains Argentina with an increase of 13.5 per cent to 21,205 vehicles, followed by Brazil with 6,005 units (previous year 7,900).

Asia/Pacific: After a strong 2021, there was a drop to 13,000 vehicles shipped in the Asia/Pacific region. Australia remains the strongest single market with 8,100 units (previous year 12,500).

Africa: The number of vehicles supplied here to customers by VWCV was 7,300 (previous year 9,000). In South Africa, the strongest individual market on the continent, units shipped of 5,200 were on a par with the previous year.