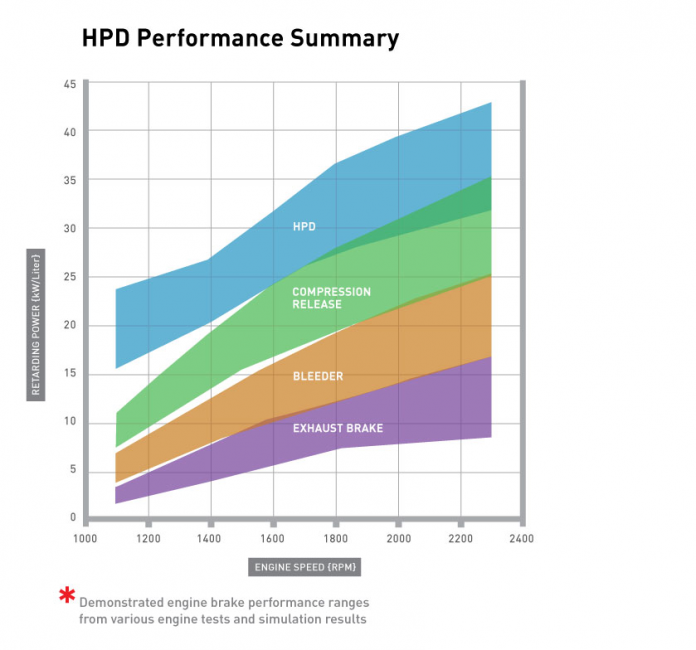 “1.5 Stroke HPD is a new development resulting from Jacobs’ ongoing HPD prototyping programme. It follows the launch of Two-Stroke HPD, which was designed for a particularly complex engine design,” explained Steve Ernest, Vice President of Engineering & Business Development at Jacobs Vehicle Systems. “1.5 Stroke HPD is a simpler and more affordable route that will see our customers achieve the same step-change in braking performance as with Two-Stroke HPD, if their engine hardware allows for that.”

“Jacobs is now able to offer OEMs a modular compression release (CR) brake design frame, from the standard CR brake to the 1.5 Stroke HPD and the Two-Stroke HPD. Integrating Jacobs technology at the beginning of an engine program means engine braking options can be easily specified and adapted by geographic market, application and lifecycle requirements, while keeping 99% of the design elements the same, saving time and cost. The validation is already taken care of and the technology is essentially future-proofed,” he added.

A conventional engine brake has one compression release and one brake gas recirculation (BGR) event for each of the engine’s cam rotations. With Two-Stroke HPD, cylinder deactivation mechanisms eliminate the main intake and exhaust valve events, allowing the intake and exhaust braking rockers to provide two intake, two CR and two BGR events per cam rotation. In 1.5 Stroke HPD, the exhaust event is deactivated; however, there is no deactivation of the main intake valve events and no additional intake lift events to support the second compression release. The normal intake is provided for the first CR, and gases used in the second compression release event are generated solely by the recirculation of exhaust manifold gases, without drawing air from the intake manifold.

With this simpler approach, 1.5 Stroke HPD nevertheless realizes braking power improvements of up to 40 percent at high engine speeds when compared with traditional compression release braking, and improvements of up to 100 percent at low engine speeds. The low rpm benefits are especially important because of the increasing numbers of engines with higher power density and lower operating speeds, characteristics shaped by the pursuit of better fuel economy and lower total cost of ownership.

The superiority of 1.5 Stroke HPD over conventional compression release braking is primarily due to the high air mass flows experienced with the Two-Stroke HPD cycle at low engine speeds, which allow the engine’s turbo to operate at higher efficiencies. The extent of improvements gained is influenced by engine architecture, design limits, and constraints. The highest engine brake performance is achievable with variable geometry turbochargers, increased injector tip temperature allowance, greater back pressure capability, and some means of adjusting boost or back-pressure.

Engine brake retarding performance has become increasingly important because key strategies for improving fuel efficiency are reducing the natural retarding of vehicles caused by aerodynamic drag, friction in the engine and drive train, and rolling resistance from the tyres.