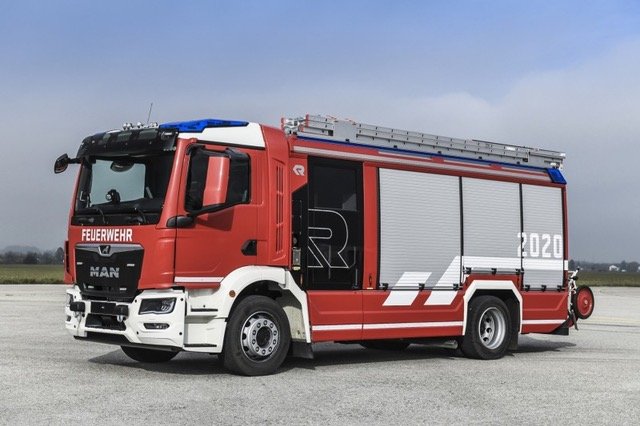 The new MAN TGL covers the weight range from 7.5 to 12 tonnes. Exclusively available in 4×2 versions, it is suitable for fire service use as a light truck with portable fire pump or built-in fire pump and a small rescue truck. The next weight category up is the new MAN TGM, as a two-axle truck from 12 to 18 tonnes and a 26-tonner with three axles. The two-axle TGM featuring on-road gear and all-wheel drive is the most widely used fire service vehicle almost everywhere in the worldwide, both in terms of numbers and variants. Engines and rescue engines, tankers, turntable ladders, aerial ladder platforms and small rescue trucks are the most common types of standardised fire service vehicle in use in Germany.

The cab – focused on the driver

The compact cab of the TGL and TGM series is now the CC, while the longer version with plenty of storage space behind the seats is the FN. The four-door double cab DN retains its capacity for a crew of six.

Emergency services crews need to get in and out of their vehicles frequently, and quickly. So safe and convenient entry and exit is crucial. The doors open at a right angle to 89 degrees. Wide steps arranged like stairs, with non-slip surfaces and long grab handles, allow for ergonomically straight entry and exit. In the parked position, the steering wheel folds horizontally forward to free up space in front of the driver’s seat. That makes entering the vehicle much easier, especially when continually changing driver. The steering wheel is swung back into the driving position at the press of a button. The newly developed seating generation offers a wide adjustment range: 12 centimetres in height and 23 centimetres in length, which is five centimetres more than before. The portfolio includes a centre seat, which is required in the CC and NN cabs for crews of three fire-fighters as stipulated by fire service vehicle standards.

The MAN D08 engine series powers the TGL and TGM. In the current Euro 6 version, the 4.6-litre four-cylinder unit develops 160, 190 or 220 hp, and is installed exclusively in the MAN TGL. The 6.9-litre six-cylinder engine in the smallest version developing 250 hp is the top engine in the TGL series, and also the entry-level power unit for the MAN TGM. The next power classes up are 290 and 320 hp. A new feature – though exclusively for emergency services vehicles – is that the top-of-the-range engine is no longer reserved just for the 18-tonne truck from the TGM series. Now, engines and rescue engines, rescue trucks as well as turntable ladders of the weight classes M II (up to 14 tonnes gross train weight) and M III (14 – 16 tonnes gross train weight) featuring all-wheel drive can also be equipped with the 320 hp engine in the public service vehicle version. In this engine, installed in the TGM from 13 tonnes gross train weight upwards, the torque reduction stipulated by law in the event of a malfunction in the exhaust gas treatment system (such as a lack of AdBlue) is disabled so as not to jeopardise the operational running. The second component that is essential to an efficient driveline is the gearbox. With MAN TipMatic, an automated manually operated gearbox is available for all engines. There are six-speed variants for the four-cylinder TGL, and 12-speed variants for the six-cylinder TGM and TGS. The rotary programme selector switch is no longer located in the instrument panel. The control is now conveniently positioned on the right-hand drop arm. As before, for almost all versions MAN offers the “Emergency” drive programme, activated by the driver when responding to an alert. The automatic gear selection provides shorter gearshifting times, higher gearshift speed and a special downshift logic when braking to accelerate quickly and powerfully after turning or crossing a junction. Manoeuvre mode enables the driver to manoeuvre slowly and precisely.