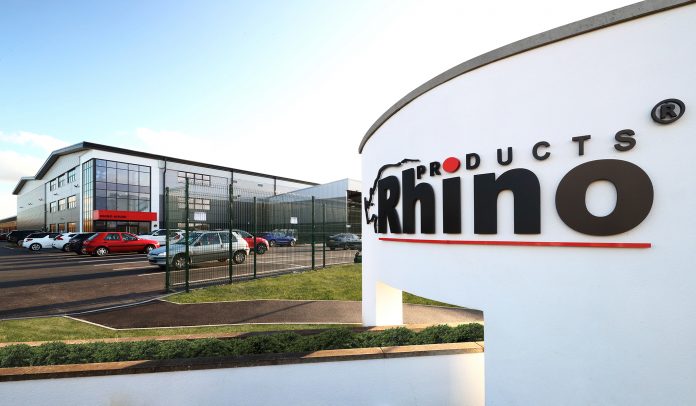 Rhino Products continuously invests in its infrastructure and personnel to meet customer demand for its high-quality commercial vehicle accessories. Recent upgrades include new manufacturing floors, offices and other facilities. As part of this, the business has also hired a number of new employees from the local area.

Forming the latest round of investment, the addition of two new SafeClamp production lines has doubled production from 500 to 1,000 pairs a day. The SafeClamp is a one touch ladder clamping system, featuring a composite beam structure and stainless-steel anchor hook. The device is five times quicker than traditional screw down ladder clamps.

To support this increased manufacturing capacity, Rhino has hired three new production staff from the local area. The lines have been built on a dedicated mezzanine floor and employ LEAN principles, with racking and continuous improvement strategies in place to maximise efficiency.

“When building Rhino House, we ensured that alongside modern office and factory spaces, we allowed for flexibility to facilitate our ambitious growth plans. This strategy has allowed us to quickly meet the growing market demand for our van accessories,” said Steve Egerton, Group CEO.

As well as the SafeClamp, all of Rhino’s roof racks, bars, ladder handling systems, steps, pipe carriers and rear door ladders are manufactured at Rhino House. Furthermore, the modern factory facilities, which include two mezzanine floors, also include expansive racking and goods-in space for stock. All in all, this ensures product availability in the UK, Europe and other export markets to meet customer demand.

Beyond the shop floor, Rhino House features a three-storey office complex with modern facilities. With plenty of room for continued expansion, Rhino can deliver its exciting plans for future growth with confidence.

Rhino Products include van roof bars, racks, rear steps and ladder handling accessories to both trades people and some of the biggest named fleets around the world.

From humble beginnings less than 20 years ago, to an international group of companies with two UK factories and three further sites in the Netherlands, Sweden and Poland. The group also includes the AVS Steps Ltd brand, a leading manufacturer of ambulance and passenger vehicle side steps.