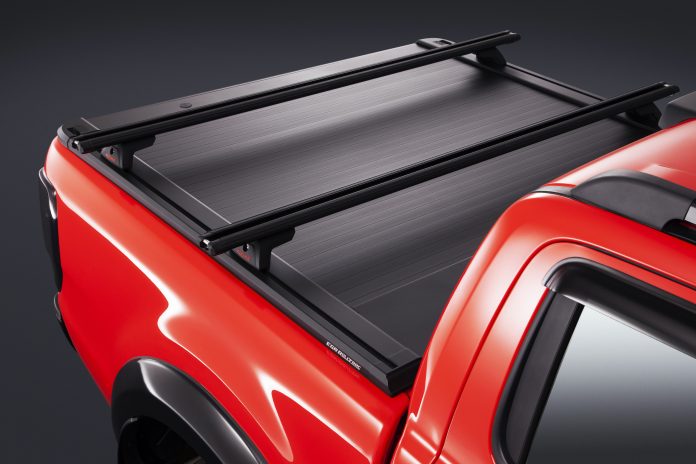 Just launched is a new electric roll cover called EGR RollTrac – believed to be the first of its kind in Europe – developed over three years of listening to Pick-up truck owners and fleet operators re their greatest bug-bears and then addressing these issues in the design.

It has exceptional security and water resistance properties to keep kit safe and dry, and incredible strength. Behind the launch in the UK and Europe is James Horwill – the ex-Wallabies captain.

EGR Group, a world-class designer and manufacturer of precision-engineered solutions for the automotive industry, has launched the EGR RollTrac, a smart electric roll cover for pickup fleets, described as the world’s first tonneau cover to integrate fully into a vehicle’s electrical system. Stylish in design, with its lightly textured black powder coat, the cover is both water resistant and scratch resistant, with a host of design features to keep a cargo safe and secure from the worst the elements and human endeavours can throw at it.

EGR RollTrac has been tested in extreme conditions to motor company standards to deliver the best all-weather performance, with an innovative aluminium interlocking slat system that prevents water from penetrating and is flush mounted to the tailgate panel to ensure any surface water is immediately displaced.

The same interlocking slat system design is also what gives the tonneau cover its incredible strength, preventing it from being slashed or cut. The cover also locks in the vehicle tailgate via claw hook style catches, affording users the best security in the market while an anti-pinch feature prevents anything from being caught (such as a child’s hand) between the cover and the tailgate when closing.

The result of more than three years’ Research and Development and built to the same exacting standards shared by leading automotive manufacturers, the EGR RollTrac integrates with remote central locking, so a separate key is not required. Onboard buttons are neatly integrated into the rear corner on both side rails so that the cover can be opened/closed from either side of the vehicle.

The cover only works when the vehicle is unlocked, and a smart ECU-controlled operation is pre-programmed to the vehicle and includes onboard fail safes to prevent using valuable energy if the vehicle battery is running low. A manual override feature is included, and an automatic internal LED light provides visibility in the rear in poor lighting conditions.

James Horwill, Director of Strategic Planning for EGR Europe, believes the roll top tonneau cover is the world’s best: “We’ve looked at all of the issues that fleet operators and owners have with ‘traditional’ tonneau covers and designed and innovated our way around them. We know fleet operators are principally concerned about safety/security and water ingress, and the costs of stolen tools or damaged equipment, and so our interlocking slat system addresses these issues and more. We know they need to be tough, but look good, and the black powder finish looks stylish enough to complement any vehicle.”

“Whether your teams are using their pickups for work, and have expensive tools or kit they need to keep safe in the back, or using them for leisure, and want to combine practicality with aesthetics, the new EGR RollTrac will make you think again about tonneau covers and what they can do.”

EGR RollTrac is distributed exclusively in the UK & Ireland by Storm Xccessories.