Home Bus and Coach The Next Bus is Coming!

Passenger transport exhibition organiser and coach and bus industry representatives, Busworld last week, hosted another Webinar in its recent series. Titled “How to restart Bus operations after the COVID 19 lockdown” – Five experts in passenger transport were assembled from all parts of the world to share their plans to get buses and passengers moving again.

The revitalization of society after a lockdown will be a phased and a difficult process. The provision of safe public transport will be extremely important if the economy is to get back on its feet. Respect for social distancing and hygiene needs for both passengers and staff is top priority in preventing the further spread of the COVID-19 virus, while the relaunch of normal activity must prevent any more economic and social loss. The next move needs to be well thought out. How do public transport agencies and operators prepare for this?

Those were the questions the speakers discussed. While most of the presentations were around city service/commuter operations, many of the challenges that private hire and inter-city operators will face when restarting their services are similar.

These five speakers who shared their experiences and insights during the Busworld Academy Webinar, are all at different stages of the cycle, for example, Chinese operators have been back in operation for a few weeks, some European operators are just getting going and across the Atlantic they are trying to operate through the virus and getting prepared for a return to normal business. At the end of the Webinar, the last speaker from the World Bank gave some thoughts on how financial aid would be made available poorer economies. 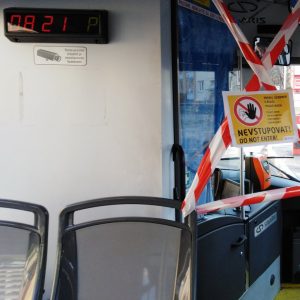 One of the most noticeable parts of all presentations was that social distancing was mentioned only as a concept, and the familiar figure of 2 metre was never mentioned. In her presentation the Belgian Transport Minister said that she would advise operators try and achieve a social distance of 1m between passengers and to rely on other measures such as temperature checks.

Members of the speaker panel included:

Li Feng is responsible for the public transport operations in Jinan city, China which has a population of 9 million. Each day 2 million people use the city bus services. The State run bus company has a staff of 13,000 and operates 5,800 vehicles. One of their concerns about opening up the market was – would people travel? Well, so far in its third week of operation, 80% of the passengers have returned and the situation is improving. Commuters must wear masks, agree to routine temperature checks, produce ID, and if asked and co-operate with extra random checks. Some extra frequency to its schedules have been put in to the system to facilitate social distancing. Air conditioning has been disabled on all buses and windows are kept open. Each day all buses are disinfected at the end of each journey, with deep cleaning done every night.

Elke Van den Brandt, who is the Minister for Transport & Road Safety in the Belgium, sees the return of efficient public transport to Brussels as an essential part of business getting back to normal, but does not under estimate the challenges ahead. One of her biggest concerns is that people may prefer the safety of their car rather than risk a bus journey. In advance of the lifting of restrictions, which began this week. The Minister said at the outset that as social distancing cannot be guaranteed on the bus, as a Government, officials must look at all other areas that can reduce risk and improve efficiency for commuters. Research figures reveal that two thirds of all commutes are less than 5km, so there is a new emphasis on walking and cycling. To encourage this mode change an extra 40km of cycle lanes have been added to the city centre area around Brussels, with some cars lanes being closed to provide additional walking areas. Employees are being encouraged to try and work outside the normal nine to five routine so as to eliminate the traditional rush hour. From a practical point of view there is an increased focus on bus hygiene, drivers wear masks and the front door on all buses will not be used. Minister Van den Brandt concluded by saying that there will be no increase in fares because of these extra costs.

In New York, the Metropolitan Transit Authority has 2.2 million passengers on its daily services. At the moment commuter numbers are down 80%, with 70% of all services in place. Craig Cipriano, Group Vice-President started his presentation with some stark numbers, 32 staff members have died from the virus, 3,600 have been confirmed as having the infection and a further 2,800 are quarantined. With a plan to open up all services on the 15-05-20, plans are in place to get 6,000 buses ready for service and 18,000 employees back to work. Turning to the financial impact on the company Mr. Capriano stated that the company has been advanced $3.6 billion from the Federal Government in State Aid, but he expects that they will need as much again. A key priority is to start collecting fares again. As in other countries there will be a big emphasis on PPE for both drivers and passengers. Random temperature checks at depots and a heavy emphasis on cleaning will be the foundation of the public safety plan.

At best India could be described as an economy in development before the virus struck. Representing the BOCI, the representative body for operators in India, Mr. Prasanna Keshav said there has been no assistance from the Government for operators or staff. As in most countries the buses are parked with little sign of any immediate return. Fares are very low in India with no top up offered from the Government. Fuel and road taxes are high and Mr. Keshav said at a minimum these taxes would have to be scrapped for at least 12 months. Social distancing will be a particular challenge, as currently most buses in the big cities operate with a load factor of 200%. Where passengers pay, it is with cash, so a large investment in IT systems will be necessary. Prasanna concluded his presentation with a simple message for the international community: “We do not have the resources in our country to reignite our economy, if public transport in India collapsed it would affect the world economy, we need assistance from the global community and the world bank.”

Set up in 1944 after World War II, the global organisation put $14 billion in place to assist countries in the aftermath of the virus.  Lending only to developing countries, the bank has identified areas such as contact payment, bus design and bus stop structures as areas of support. All loans advanced will be low interest and will be administered through the domestic banking system in the individual countries.

From listening to the speakers from around the world, it is clear the problems are serious, but similar in every country. Where the differences occur is the resources that are available to operators. In Ireland, we are a bit behind most countries in the timeline of opening our economy, which will allow to learn important lessons from others. One of the noticeable comments from all operators and Authorities in their comments was an admission that social distancing could not be guaranteed. No doubt this will be a big talking point in Ireland when the economy opens up. Bus operators need to take control of their industry and take the lead with the Authorities here in terms of best international practice.