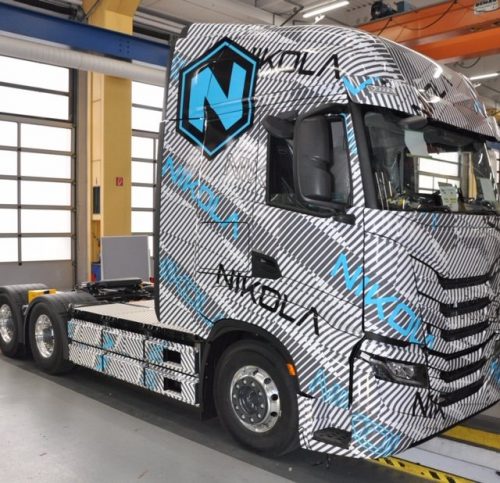 “In the third quarter of 2020, Nikola made significant progress on key milestones,” said Mark Russell, Nikola’s Chief Executive Officer. “We delivered on our commitment to assemble the first Nikola Tre BEV prototypes and are continuing to work with customers on the prospective and previously announced BEV truck orders. I look forward to building on our momentum as we execute our strategy and lay the groundwork to become an integrated zero-emissions transportation solutions leader.”

During the third quarter, Nikola and IVECO, (a CNH Industrial brand) began assembling the first five Nikola Tre BEV prototypes at IVECO’s industrial complex in Ulm, Germany, and recently completed the assembly of the first Nikola Tre. The first truck is undergoing systems commissioning, including charging and discharging the high voltage batteries. It has also been put onto the chassis dyno and is undergoing torque command calibration to the e-axles on the test track to prepare for validation testing in the first quarter of 2021.

Nikola and IVECO are working diligently to complete the remaining four Nikola Tre prototypes and Nikola anticipates these vehicles will be finished by the end of 2020. The second batch of prototype assembly is expected to begin in the first quarter of 2021.

On September 8, 2020, Nikola announced a strategic partnership agreement with General Motors Co., which contemplates General Motors receiving equity stake in Nikola in exchange for various in-kind services. The transaction has not closed, and Nikola is continuing its discussions with General Motors.  Nikola will provide further updates when appropriate or required.

Made Significant Progress Toward Completion of Building Modifications at Nikola’s Manufacturing Facility on IVECO’s Industrial Complex in Ulm, Germany

During the third quarter, Nikola and IVECO made substantial progress in refurbishing the joint venture manufacturing facility dedicated to the Nikola Tre at IVECO’s industrial complex in Ulm, Germany. The civil works and building infrastructure have been completed, including the floor, heating system, and walls. The building of the work cells is currently in process. Upon completing the work cells, Nikola and IVECO will begin installing the Automated Guided Vehicle Systems (AGV) line and heavy-duty assembly tools, such as impact drivers and tilting systems. The Joint Venture Manufacturing Facility is the lead plant for the launch of Nikola Tre BEV in the U.S. by the fourth quarter of 2021.  North American production of the Nikola Tre BEV will commence upon Phase 1.0 completion of our Coolidge, Arizona plant, beginning with truck assembly from component kits imported from Europe.

On July 23, 2020, Nikola and its construction partner, Walbridge, broke ground on the U.S. manufacturing facility in Coolidge, Arizona. The facility’s master site plan has been completed, submitted, and approved by Coolidge. Currently, the construction of the Phase 1 assembly shop is on track to be completed toward the end of 2021.

In August 2020, preliminary earthwork began to prepare the site for grading and utilities. In October 2020, the mass grading of the site started, and the Company awarded initial building sub-contracts. By the end of November 2020, Nikola expects the site work will include utilities, building pad grading in preparation of foundations, and factory floor slab, followed by steel erection through December 2020 and January 2021.

Permits are being submitted building by building for various construction phases as work is scheduled and progressing. This permitting process is coordinated with Coolidge’s city building department, which is providing excellent support in maintaining Nikola’s schedule.

The manufacturing process engineering is continuing, with initial equipment such as heavy-duty dynamometer, roll, and brake test, and heavy frame turning equipment being purchased while truck conveyance equipment and remaining tooling is being finalized.

Based on Nikola’s current construction rate, the Company plans to begin trial production in the late second quarter or early third quarter of 2021. The full completion of the Phase 1 assembly shop will continue through 2021.

Nikola is committed to strengthening its corporate governance practices. On September 20, 2020, Nikola announced the appointment of Steve Girsky as Chairman of the Board. In October 2020, the Company appointed Steve Shindler as a new independent director and Chair of the Audit Committee, and Bruce Smith as a new independent director. Both Mr. Shindler and Mr. Smith are seasoned executives, and Nikola welcomes the experience and fresh perspective they will bring to the Board as the Company continues to execute its strategic and business priorities.

Ended the Quarter with a Strong Cash Position of $908 Million, Net of $15 Million in Restricted Cash

On July 22, 2020, Nikola issued a formal notice of redemption for its public warrants. The redemption of 22,877,806 warrants in the third quarter resulted in approximately $263 million of additional cash on the balance sheet. Nikola ended the third quarter with a strong cash position of $908 million.

The health and safety of Nikola’s employees and communities are the Company’s top priority. Nikola’s management team has taken every step to ensure its team can safely continue working to advance the Company’s strategy and vision to become a global leader in zero-emissions transportation.

Nikola decided to reschedule Nikola World due to COVID-19 audience size restrictions until the Nikola community could safely be brought together. The COVID-19 pandemic remains dynamic, and the Company continues to monitor public health conditions actively and plan around any associated effects on our operations in the U.S. and Germany. Nikola’s current timelines assume there are no significant COVID-related disruptions to production. At this time Nikola believes its long-term objectives will not be materially affected by COVID-19, and Nikola will continue to provide progress updates across its entire product portfolio.

As a pre-revenue company, Nikola believes the best way to evaluate its results is to monitor the Company’s progress toward achieving its milestones. Nikola remains committed to its goal of announcing potential collaboration partners concerning electricity procurement and the rollout of hydrogen fueling infrastructure. In addition, during the fourth quarter of 2020, Nikola expects to make continued progress against its milestones for the development of the Tre BEV and construction of the Coolidge, Arizona, facility.  Management is laser-focused on prioritizing programs and aligning resources to achieve Nikola’s previously announced milestones toward becoming the zero-emissions transportation industry leader.