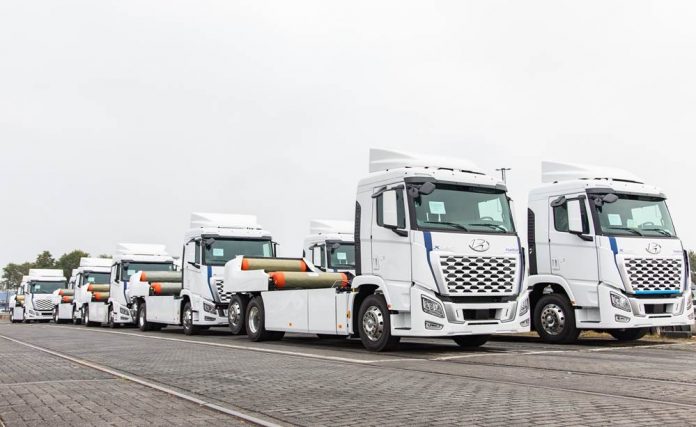 A key moment for Hyundai and HyLane, with the first delivery of the first of a fleet of new Hyundai XCIENT Fuel Cell trucks for Germany in Bremerhaven. The first seven trucks are part of a total of 27 vehicles due to be delivered to Germany straight from the Hyundai plant in South Korea in the coming weeks. In the first phase, HyLane is taking delivery of a total of 17 trucks.

The arrival of the latest Hyundai hydrogen fuel-cell electric trucks marks a milestone in the history of mobility in Germany – with the potential to decarbonise heavy road transport. Beat Hirschi, CEO of Hyundai HHM commented on the deal: “This is a historic moment. Following the successful launch of the Hyundai XCIENT Fuel Cell truck in Switzerland, we are expanding our activities in Europe, and focusing initially on Germany. We were successful in convincing hylane to participate, a young company that shares our values and makes a real contribution to environmental protection and the decarbonisation of heavy goods transport.”

Sara Schiffer, Managing Director of hylane, stated: “The first series-production trucks form the basis for a long-term cooperation with Hyundai, which we will continuously expand from now on. We rent the vehicles out at a fixed price per kilometre, allowing our customers to use the trucks as they need and with little risk.”

All the vehicles delivered were funded by the Federal Ministry for Digital and Transport. The funding programme is coordinated by NOW GmbH.

Kurt-Christoph von Knobelsdorff, CEO of NOW added: “Commercial vehicles with hydrogen fuel-cell drive systems have great potential to make road freight transport in Germany and Europe more sustainable, especially on long-distance routes. The logistics industry is showing considerable interest in hydrogen fuel-cell trucks, so the arrival of the first vehicles from series production is very good news. NOW is pleased to congratulate hylane on this step and looks forward to continuing to support this DEVK start-up.”

The XCIENT Fuel Cell vehicles have a range of around 400 kilometres. They store the hydrogen in seven tanks, with an average refuelling time of ten minutes. The XCIENT Fuel Cell for hylane is a further development of the first series-produced H2 trucks to be used in Germany. As soon as they leave the ship, the vehicles go straight to the body-builders, where the customised versions (e.g. refrigerated or dry boxes) are configured.