Home Breaking News On the road with the International Truck of the Year 2020 –... 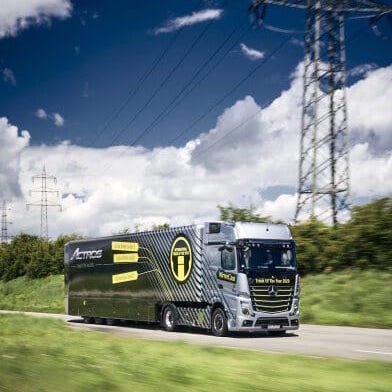 Dirk Stranz is very matter-of-fact when it comes to trucks. “We build the vehicles that transport goods – and they have to be able to do that both safely and efficiently,” says the test engineer from Mercedes-Benz Trucks as he walks down the staircase from his office in the Wörth development and testing centre into the foyer. “But the Actros Edition 1 in the ‘Truck of the Year’ design is a truck which stands out from the crowd.” Dirk Stranz and his colleagues were part of the team that created the success story on four wheels in front of which he is now standing: lots of the innovations which are characteristic of today’s Mercedes-Benz Actros model series were tested by the test engineer before being launched on the market.

Stranz is now in the entrance hall of the development and testing centre which is located close to the Mercedes-Benz Wörth plant. Over the past year and a half, the centre has been expanded. In total, 70 million euros have been spent on the location.

“A truck which impresses its drivers”

When Stranz talks about his work, he quickly starts getting excited: “It’s a great job that we have here.” The top-of-the-range model parked in front of him revolutionised the logistics sector and was crowned International Truck of the Year 2020 by a team of specialist journalists from 24 European countries. Dirk Stranz is particularly familiar with the Mercedes-Benz Actros parked here in the foyer. He and one of his colleagues drove the silver-grey flagship to the awards ceremony in Lyon. “It’s a truck which truly impresses its drivers.” With his left forefinger, he touches the “Truck of The Year 2020” logo which adorns the radiator grille of the Actros 1863 Edition 1. His smile reveals that he is a huge fan of the truck himself. Just 400 units of the Edition 1 model rolled off the production line in Wörth. “If I spot one of them while I’m driving on the motorway, I recognise it immediately. The main-beam headlamps in the sun visor or the stainless steel trim strips – even the smallest of details: I don’t miss a trick!”

Inside the vehicle, the truck also sets itself apart from the competition. But what are his favourite aspects of the Edition 1 model? Stranz, who is now sitting in the driver’s seat, smiles and passes his hand over the leather-clad dashboard. “It’s like being in an S-Class,” he says. “But there was one thing that was clear to us during the development and equipment of the truck: the Edition 1 isn’t just a looker, its primary task is fulfilling its duties diligently.”

Stranz knows several logistics firms which have the special model with the highest engine output in their fleet. “Within those companies, the trucks sometimes get used for special tasks. For example, if a transport task involves driving on the A7 via the hilly Kasseler Berge stretch with a fully-laden truck, then it would certainly be a good place to use all of the truck’s 460-kW output. After all, the Edition 1 trucks have to earn money just like any other truck.” Stranz knows that the special models often stay with a company for a long time. “I even know companies which collect the Edition models.” Irrespective of this, the truck doesn’t just impress its drivers, it also makes them proud to be behind the wheel. “The vehicle is a mobile business card for the company. And if a fleet manager assigns a driver to this truck, it’s a sign of respect and trust towards that driver.”

MirrorCam: one of more than 60 innovations in the Actros

At the time, Dirk Stranz wasn’t surprised that the Actros was elected International Truck Of The Year. “We were pretty sure the truck would be well-liked by the jury, but as to whether it would be sufficient to bring home the accolade, well you can never be so sure of that. In the end, with more than 60 innovations on-board, the new Actros did manage to win over the jury.” Among the innovations are Active Drive Assist, Active Brake Assist 5, the Multimedia Cockpit, the re-worked Predictive Powertrain Control and probably the most noticeable characteristic – the MirrorCam. This comes as standard in a number of markets and brings with it some interesting benefits: removal of the mirror housing from the field of vision and a picture which follows the movement of the semitrailer when driving round bounds. As a test engineer, this technology was one of the aspects in whose development Stranz was actively involved. “There’s never been anything like this before. And so its development was accordingly demanding.”

Since 2012, the test engineer has had the occasion to put the system prototypes through their paces. Apart from in the development and testing centre in Wörth, he was also behind the wheel for a good many trips on Europe’s motorways and city traffic, as well as being part of the team that tested the vehicles in Spain and the Polar Circle, not to mention in various light conditions and the rain. In the meantime he’s driven countless times through nearby Karlsruhe to observe people’s reactions to the system. “You test in all possible conditions. Once, we spent weeks waiting for some real fog. We put a lot of our heart and soul into the testing.” And if it wasn’t already, it should now be very clear that truck development is more than just a job for Dirk Stranz. 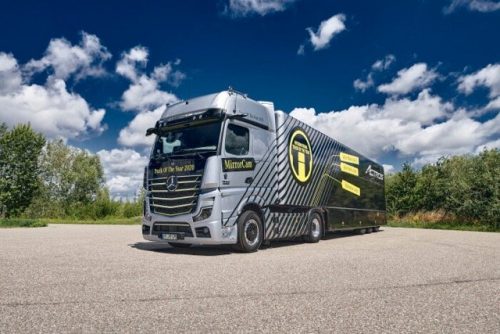