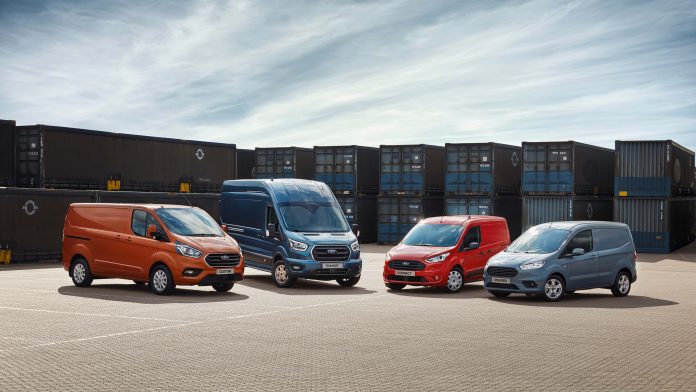 The man responsible for Ford’s Transit and Transit Custom in Europe, North America & Russia has strong Irish connections. Fleet Transport met with Michael McDonagh at the launch of the Transit Custom PHEV in Sweden.

So about those Irish connections?

I was born in County Sligo, my father comes from Tubbercurry, my mother from Carracastle in Mayo, and I still have a number of relatives, mainly in Roscommon in the Ballaghadereen area.

As the person responsible for the Transit, what are the stand-out features of the new 2-tonne Transit?

Th e 2-tonne Transit was all about satisfying customers’ needs. So the main focus was all around improving fuel economy, and increasing the payload for the customer. And then beyond that, helping the driver, so improving the driver environment and providing new technologies that will keep the vehicle on the road and keep the driver safe.

Everything we did was all about maximising uptime and reducing cost of ownership for fleets.

So from the outside there are some appearance changes but they’re not significant. But in total we’ve changed 4,600 parts on the vehicle just to realise those key benefits of cost of ownership and maximising uptime.

We’re trying to develop our business in conjunction with our customers so if they thrive, we thrive. So we’ve now installed connected embedded modems in all of our vehicles. By Spring of next year they will be in 100% of Transits. What that enables is a flow of connected data back to Ford, but also we can now offer applications to our fleets, either small or larger fleets where they can manage their business and maximise the efficiency of how they run their business. It also gives us the opportunity to recognise if there is something that needs to be done on the vehicle, and we can inform the customer and invite the customer to come in before they end up having to take the vehicle off the road.

Th e new 2.0 litre diesel on the new Transit and Transit Custom features mild hybrid technology. What was the rationale behind adopting this?

It is all about fuel economy. The mild hybrid with 48-volt battery sitting under the passenger seat recovers energy during deceleration and uses that energy for auxiliary features so you’re not pulling

It’s Formula 1 technology but in a Formula 1 car it’s for performance. However, if you flip that the other way and put it for fuel efficiency the driver won’t notice it’s working. They will just notice they are getting better fuel economy.

The road for electrification is a long one and all of the OEMs are trying to test where the industry and the world is going on this. We selected our first step would be mild hybrid technology on the 2-tonne Transit plus the plug-in hybrid on the 1-tonne (Custom), because we recognised it was going to give the best customer benefit. It allows for much better fuel economy but also no range anxiety about running out of electricity and having to stop for half an hour or an hour to recharge. We did do trials, we’ve done them in London, we’re about to start some in Cologne and Valencia, and without question, everybody who has tried the vehicles and used them recognises the benefit. Personally I think we have probably under-called where that will go.

Now whether that is the right technology, time will tell, but it’s part of our development and evolution in the electrification world. We have already announced that we are developing a full electric 2-tonne Transit coming at a point in time. We will have a suite of electric vehicles. Not every vehicle will suit every customer but we will have a product that should suit every customer that comes into our dealerships.

What about diesel hybrids – have they a future?

Th ere is a future in diesel hybrid technology, but it does rely on a smaller diesel. The diesel we have at the moment in the Transit is a large one (2.0 litres). That’s why we opted for the 3-cylinder 1.0 litre EcoBoost petrol engine as the PHEV. Developments continue, we clearly have our other diesel engines, but on our current platform there is no plan to do a diesel derived hybrid, though there may be plans going forward. We’re working on the next generation Transit and all of these considerations are being taken into account. Th e development of the PHEV is a direct input to that next generation of Transit that will come.