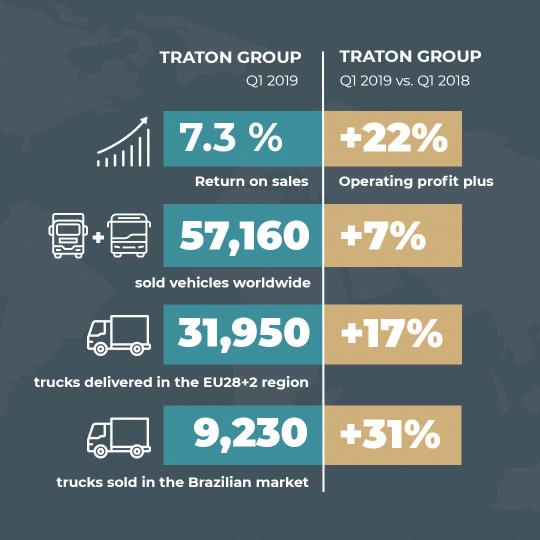 The Traton Group has got 2019 off to a strong start increasing its  operating  profit  during Quarter 1 by  21.9%  compared  with  the  prior-year  quarter to €470 million. All three brands MAN, Scania, and Volkswagen Caminhões e Ônibus (South America) contributed to this positive result. Sales revenue rose by 6.0% year-on-year to €6.4 billion across all brands. During the first three months of 2019, the Traton Group sold 57,160 vehicles worldwide, up 7.4% against the prior-year figure. This growth was primarily supported by the continued positive economic developments within its core markets of Europe and Brazil.

Commenting on the figures Andreas Renschler, the CEO of Traton and a member of the Board of Management of Volkswagen AG, said: “We continue to pursue our profitable growth path we set out on when our Group was established. The Group recorded the highest-ever unit sales in a single quarter. Our further aim remains very clear: we want to be an independent Global Champion in the transportation industry. With the full support of Volkswagen AG, we continue to work on implementing our strategy.”

With its brands MAN, Scania, and Volkswagen Caminhões e Ônibus, the Traton Group is a leading commercial vehicle manufacturer worldwide, pursuing the goal of creating a Global Champion in the industry through profitable growth, customer-centric innovations, and global expansion. The Group posted operating profit of €470 million, which is reflected in an operating return on sales of 7.3% (previous year: 6.4%).

The operating units at a glance

MAN Truck & Bus is a reliable full-service provider with the aim of supporting and facilitating its customers’ business operations. At 24,970, MAN registered the most vehicle deliveries among the Traton Group brands, selling significantly more vehicles in the first quarter of 2019 (+13%) than during the same period in the previous year. In addition to the boost in the sales of trucks, the MAN TGE van series contributed continued significant  growth.  Sales  revenue  of  the  MAN Truck & Bus  operational  unit  rose  by  around  7%  to €2.6 billion. The operating profit increased by around 30% to €122 million, with operating return on sales of 4.7% (previous year: 3.8%).

The Scania brand is the premium innovation leader of sustainable transportation solutions. At 23,580 trucks and buses, Scania delivered more vehicles in the first quarter than in the same period last year (+4%). Sales revenue of the Scania Vehicles & Services operational unit rose by around 11% to around €3.4 billion. Operating profit increased by around 24% to €370 million, as a result of higher vehicle and service volume and a positive currency effect. The operating return on sales of Scania Vehicles & Services for the first three months of the year was 11.0% (previous year: 9.9%).

VWCO has continuously held a leading position in the Brazilian truck market over the past 15 years. In the first quarter, demand for VWCO vehicles increased by just over 12% to 9,840 units. Improved pricing in the local Brazilian market and a favorable product mix contributed to the more pronounced increase in  sales revenue of 21% to €416 million. VWCO recorded operating profit of €8 million, with operating return on sales of 2.0% (previous year: 0.5%).