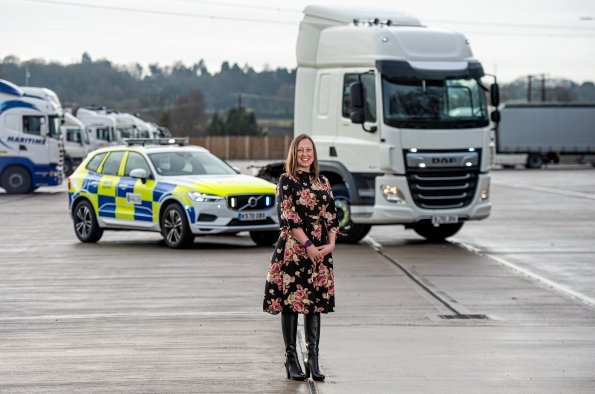 Since 2015, National Highways has been collaborating with the Police at a national level to target dangerously driven commercial vehicles, other high sided vehicles and private cars to improve compliance and to reduce the number of incidents caused by unsafe driver behaviour.

The elevated position of the HGV cabs allows police forces to drive alongside vehicles to film any unsafe driver behaviour taking place.

Marie Biddulph is National Highways’ Assistant Regional Safety Co-ordinator in the Midlands and, through Operation Tramline, plays a vital role in keeping drivers safe on the strategic road network.

Together with Women in Transport, Driving for Better Business continues to shine a light on the diverse roles of women working in transport and road safety. The three plain white HGV tractor units, loaned out to Police forces by National Highways, help to highlight the small number of road users who are putting themselves and others at risk by ignoring the law. Operation Tramline is a great demonstration of partnership working with Police Forces where the aim is to improve road safety for all and reduce the number of people killed or seriously injured.

Nearly 30,000 offences have been recorded by officers in the vehicles since the national safety initiative began. The top three offences detected continue to be seat belt offences, mobile phone use whilst driving, and drivers not in proper control of their vehicle.

“The programme and the messaging are well received by other road users and the media,” stated Marie. “Everyone has something positive to say about it as the reason for the cabs’ presence is very clear and resonates with people. We encourage all road users to think about their driving behaviours and make sure they are not putting themselves and others at risk.”

About Driving for Better Business
Driving for work is one of the highest-risk activities that many employees undertake, whether they drive a commercial vehicle, a company car or make occasional work journeys in their own vehicle. As the gig economy continues to grow, this also means those who ride for work as well as those who drive.

Driving for Better Business is a free to access government-backed National Highways programme, delivered in partnership with RoadSafe, to help employers in the private and public sectors reduce work-related road risk, protecting staff who drive or ride for work, and others who they may share the road with.