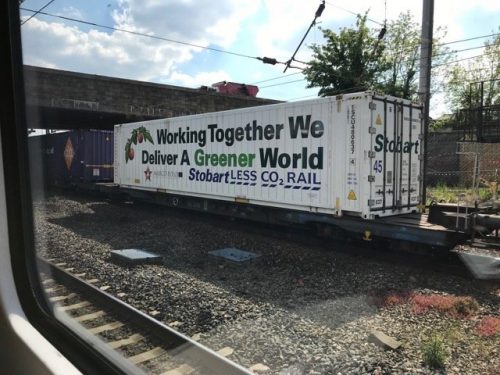 West on Track has made a joint submission to the Draft Mayo County Development Plan on behalf of over 3,000 members and supporters in favour of the Council’s stance on protecting the Western Rail Corridor for future use.

Recognising the current very difficult operating environment for local authorities, it was agreed that a single submission would be made on behalf of West on Track in support of the rail strategy and rail objectives outlined in the Mayo Draft Plan. Members and supporters were requested not to send individual submissions and the single submission by West on Track is representative of their views as a whole.

“We appreciate that the consultation on the development of the County Development Plan is not a plebiscite, as some people mistakenly appear to believe, and policy can only be decided in line with statutory objectives, such as those contained in the democratically adopted Regional Spatial and Economic Strategy, rather than by Facebook campaigns or multiple identical submissions.

Objective MTP 10 of the Mayo Draft Plan reiterates the Council’s support “for the re-opening of the Western Rail Corridor in order to deliver the Athenry – Tuam – Claremorris – Sligo Rail to an appropriate level of service and to a standard capable of facilitating passenger and freight transport and present an opportunity to provide an integrated rail linkage to the Ireland West Airport Knock and its Strategic Development Zone.”

This policy was unanimously supported by the elected members of Mayo County Council at its meeting in February and has the strong support of all elected TDs and Senators in Mayo.

The West on Track submission supports the plans of Mayo County Council to develop local greenways for all Mayo towns including Charlestown, Swinford and Kiltimagh and notes that such walking paths and cycle facilities for communities can be developed virtually anywhere, whether through woods owned by Coillte, along river banks, or by linking existing paths around towns, as evidenced by the major greenway developments at Castlebar-Turlough, Westport and Claremorris, all of which have been hugely successful.

We would therefore urge those people who have been talking about putting a greenway on the railway to reconsider and look at such alternative ideas which can be easily delivered with the support of all. There is no need to jeopardize the future re-opening of a major piece of transport infrastructure by insisting that it alone offers the only option for such a development.

A submission by the Department of Transport suggesting that the Council might consider changing the name of the Western Rail Corridor to a so-called ‘transport corridor’ and possibly consider turning it into a greenway, is completely at odds with the will of the elected members and the announcement this week by the Transport Minister, Eamonn Ryan, that the forthcoming All-Island Rail Review will be looking to expand and develop regional railways and will be supportive of balanced regional development.

A submission by Iarnród Éireann referring to greenways on railways as a “win-win” situation is equally at odds with the Minister’s announcement. It is surprising and disappointing to hear the national railway company suggesting that ripping up railway infrastructure and replacing it with bicycle tracks could be considered a positive development. The West needs a great deal more ambition than these Dublin-based submissions appear to envisage.

Finally, we note that the Western Inter-County Railway Committee, representing the six County Councils of Connacht and Clare, has also made a strong pro-rail submission.”

“New Rosslare-Dunkirk service will be a crucial route to EU for...