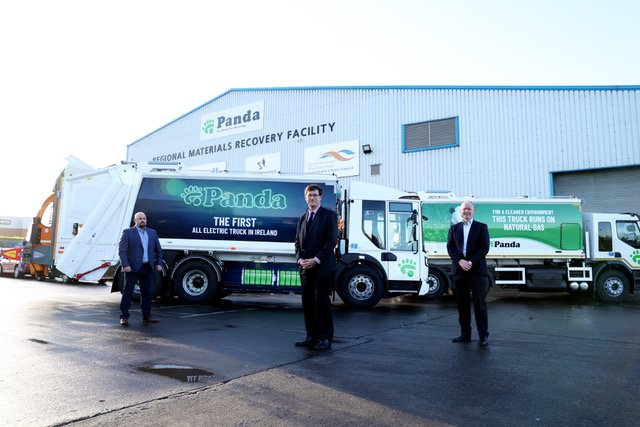 The arrival of Ireland’s first ever fully electric, zero emission refuse collection vehicle (eRCV) is the first of its kind for a municipal waste and recycling operator in Ireland. Newly installed solar panels powering the nation’s largest household recycling facility in Ballymount will also charge the electric vehicle, making the entire process of collecting and recycling waste completely carbon-free. The emission-free vehicle is also significantly quieter while operating in residential areas.

Built by Electra in the UK on a Dennis Eagle Eilte 2 6×2 rear steer chassis, the 26 tonnes GVW rigid features an Olympus body with Terberg Omnidel bin lift. Powered by a 300 kW electric motor/battery pack, its range distance covers 8 to 10 working hours depending on terrain, with a recharge time of 5 hours.

With this initial acquisition, Panda is on track to have the urban fleet fully electric by 2024. The replacement of 30 vehicles currently in operation within Dublin City would result in a net reduction of 810 tonnes of CO2 per annum. Orders are currently being processed with two major eRCV manufacturers for this significant fleet renewal, with delivery expected in early 2021. Last year, Panda announced an investment into 45 Compressed Natural Gas (CNG) fuelled refuse trucks to be rolled out in rural areas.

Alongside this development, Panda has signed an agreement to construct Ireland’s first dedicated bottle to bottle plastic recycling facility in Portlaoise. The €20m investment will create up to 100 new jobs. Panda is  currently collaborating with Trinity College Dublin and Science Foundation Ireland on this project as part of a circular economy application for the European Green Deal.

The new facility is projected to be operational by the end of 2021 and will process up to one billion plastic water and soft drinks bottles per year. 20,000 tonnes of plastic bottles used in Ireland are currently exported to the UK and Europe for processing. The plant in Portlaoise will have the capacity to serve the entire Irish market, eliminating the need to export.

Panda is in advanced negotiations with a number of major soft drinks manufacturers to collect, sort and process the material into new bottles, Ultimately, many of these bottles will be collected using the zero emissions electric vehicles, facilitating a ‘closed loop’ recycling process.

On his visit to Panda for the announcement, Minister for the Environment, Climate and Communications and Minister for Transport, Eamon Ryan TD commented:

“With the Waste Action Plan for a Circular Economy we are fighting the battle against plastic pollution on a number of fronts, including the introduction of a deposit and return scheme and the banning of many single-use plastic products. Panda’s announcement of a bottle to bottle recycling facility will create 100 new jobs in Portlaoise and will convert the bottles collected here in Ireland into new bottles instead of exporting them abroad. It’s a win for the environment, a win for jobs, a win for the region, and an example of how the green economy can be a source of employment in the future.”

“The introduction of this electric powered waste collection vehicle to our Dublin streets is another step towards ‘closing the loop’ of the recycling process. The electric-powered trucks will be powered by clean solar energy from Panda’s roof, will not emit any carbon on our roads and will prevent the emission of further carbon in the production of goods by delivering recyclable material to the facility.”

Des Crinion, Managing Director Recycling, Beauparc added: “The commissioning of electric refuse collection vehicles is a key development in our ambition to reduce our carbon emissions and push the circular economy forward. Sustainability is at the heart of our business and this is a significant step for our company that will keep us at the forefront of industrial environmental excellence. Of course, it is vital that the material these vehicles collect is managed in the most environmentally responsible way, and that is why I am especially pleased to announce our plans for a bottle to bottle recycling facility as well. As a nation we are becoming increasingly aware of the need to improve our performance with regard to sustainability, waste generation, plastics and the circular economy. The processing of plastic waste produced in Ireland and its use now to produce new products helps keep precious resources in circular use.

This project follows on from the successful opening of our plastic wrap recycling operation earlier this year and is the latest move in our three-year strategy towards the goal of recycling all plastic packaging.”

Beauparc currently employs 2,300 people, processes 2 million tonnes of material across Ireland, the UK and Europe and supplies over 75,000 homes and businesses with renewable electricity.