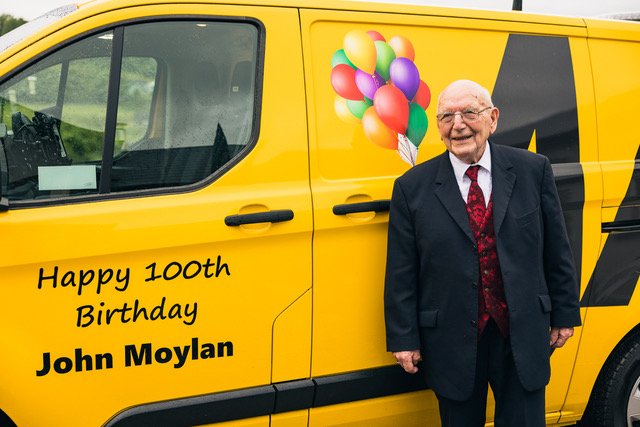 When former patrol John Moylan started with The Automobile Association (AA) in Ireland, Sean T. O’Kelly was President, Eamon de Valera was Taoiseach and the romantic comedy, The Quiet Man was just reaching cinemas. 70 years ago, the roads of Ireland looked very different and an AA Patrol had to fix many problems that were quite different to today.

In Durrow, County Laois, John Moylan was surrounded by family and friends as he celebrated his 100th birthday and The Automobile Association was delighted to take part. AA Rescue Centre Operator, Ken Deegan was given the honour of reading out a letter from President Michael D. Higgins and handing over the Presidential cheque of €100 to John.

John was delighted to see a new AA Patrol van, which was decked out with a special birthday message, arrive at the front door and was keen to climb into the passenger seat to explore the new technology, a far cry from the old Austin Maestro vans that were in use as he retired in 1987.

“I liked the pay the most. I’d worked in a garage before that and had not done very well financially. And I loved being recognised on the road. People were always saluting the car as you drove past,” said John.

John’s favourite car to work on was the Ford Prefect: “it was so simple and basic, there were no electronics and everything was under your hand”.

And his best memory? “It will be hard to beat getting this letter from the President. All the years of hard graft paled into insignificance because there was so much to take in, and so much excitement on my birthday.”

John Moylan worked for the AA from 1952 to 1987 and we are honoured to be able to mark his special birthday. 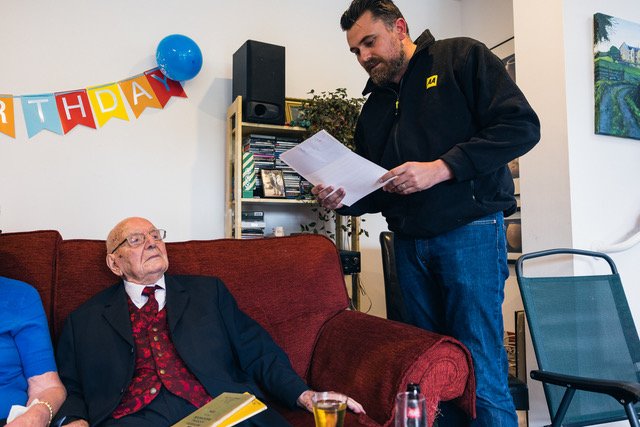