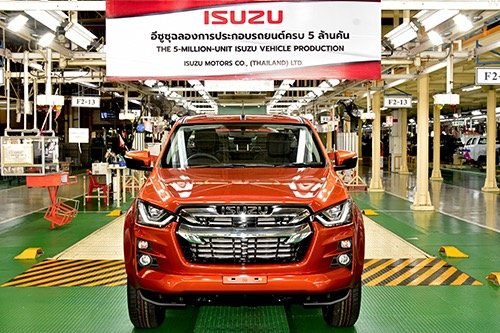 Isuzu began manufacturing vehicles in Thailand in 1963 under a subcontracting arrangement. Three years later the Isuzu Motors Company (Thailand) Ltd., was formed. For over half a century, it has been manufacturing commercial vehicles such as the Isuzu D-Max Pick-up Trucks and PPV (Passenger Pickup Vehicles). Since Isuzu began to manufacturing Pick-ups for the Thai market in 1974, the annual volume has been growing steadily and now totalled five million units in 56 years and 11 months.

Export of Isuzu Pick-ups began in 1999, first to Australia, and then to other overseas destinations. In 2002, the manufacturing of Pick-up for export was completely relocated from Japan to Thailand and is now supplying Isuzu vehicles to more than 100 countries and regions.
Currently 5,753 are employed at the Phrapradaeng, Samutprakan plant, which has an annual capacity of 361,000 units. In 2019, 319,000 units were manufactured. Isuzu Motors Co. will continue to provide vehicles to respond to the various needs of customers around the world, while strengthening brand presence and its sales network.