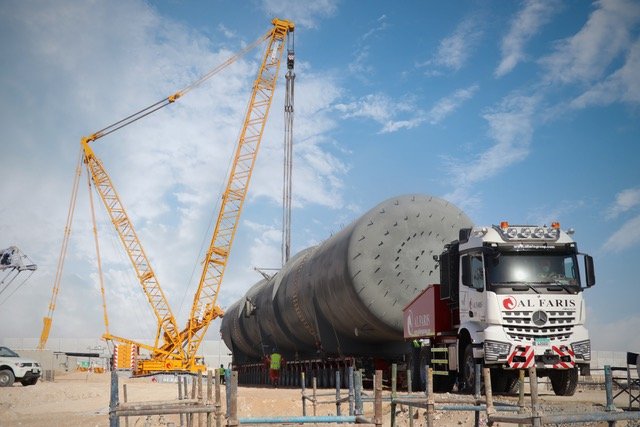 The safe and reliable transport of 52-meter-long loads weighing 235 tonnes involved extensive logistical preparation and various permits. Every journey was made in a convoy of two files, each comprising 30 Goldhofer heavy-duty axle lines and a Mercedes-Benz Arocs heavy haul tractor-unit. This ensured punctual delivery. The tanks are used together with an expansion tank as part of an overflow storage system, in which the expanded thermal fluid can be stored and reused. With a final generating capacity of 5,000 MW, the plant in Seih Al Dahal, which is partly operational already, will be the world’s largest single-site solar farm.

“Our planning was 100% successful and we were able to move the tanks to their destination within a very short time,” said Mr. Pinto, founder and managing director of the Al Faris Group. On arrival at the site, the tanks were offloaded and moved about 100 meters by a 400-tonne crawler crane and placed on the awaiting foundations.

Dean Exner, Goldhofer’s Regional Director of Sales for the Middle East, was equally delighted with the outcome of the mega-project handled by his customer Al Faris: “When it comes to transporting ultra-heavy and voluminous cargoes on and off- road, the THP/SL modules are often the most economical solution. They are the key to extremely high payloads in combination with long continuous operations.” 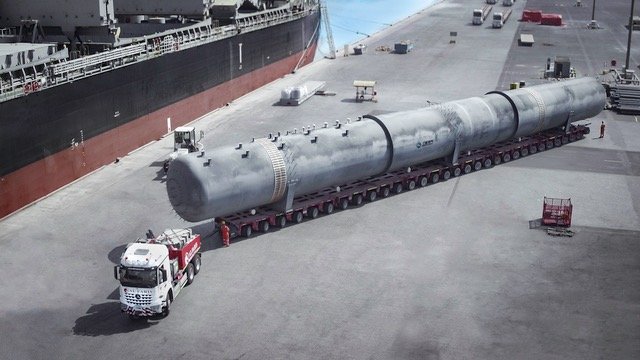