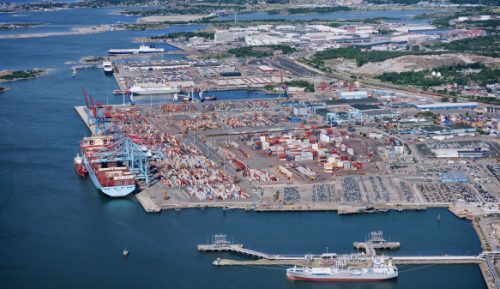 In 2018, 753,000 containers (TEU) were handled at the Port of Gothenburg. Photo: Gothenburg Port Authority.

Port of Gothenburg freight figures for 2018 have just been compiled. Container volumes rose by 17 per cent compared with the previous year. Energy products, intra-European ro-ro* units and new cars all fell by one per cent, albeit in relation to the high comparative figures for these three segments in 2017.

High figures for cars and ro-ro level out
Following volume growth for three consecutive years, intra-European ro-ro figures have levelled out but still remain high. A total of 584,000 units were handled in 2018, down one per cent compared to the previous year.

During 2017, the number of new cars passing through the port was the highest for 10 years. Despite a one per cent fall, the figures for 2018 show that volumes remain consistently high.

The Port of Gothenburg is the only port in Sweden with the capacity to receive the world’s largest container vessels and has the broadest range of shipping routes within and outside Europe. The 25 rail shuttles that depart each day mean that companies throughout Sweden and Norway have a direct, environmentally smart link to the largest port in the Nordic region. The Port of Gothenburg has terminals for oil, cars, ro-ro, containers and passengers.