Home Breaking News Potential for up to 2,000 jobs in South-East under Rosslare Europort Offshore... 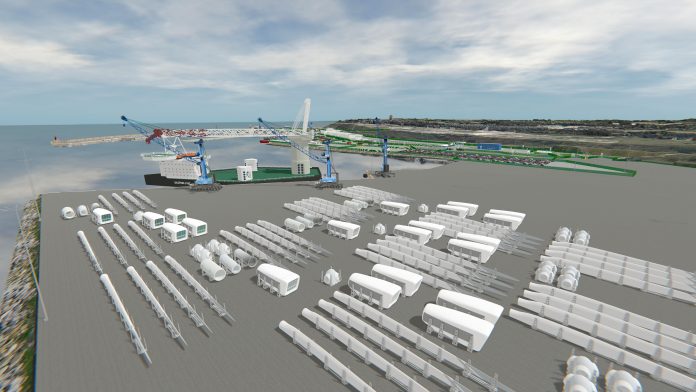 Gateway to Europe and soon to be Ireland’s Offshore Renewable Energy Hub, Rosslare Europort announces big plans for the future.

Rosslare Europort management is announcing plans to establish the port, its hinterland and the south-east region as Ireland’s Offshore Renewable Energy (ORE) Hub, with the potential to create 2,000 jobs.

After a history making 2021 which saw Rosslare Europort become Ireland’s number one port for direct RoRo/Pax services to Europe, the port today (Friday 22nd April) outlines its vision to become the Offshore Renewable Energy Hub of Ireland at a seminar in the Terminal Building (10:45hrs, Fri 22nd April).

At the event, Jim Meade, Chief Executive of Iarnród Éireann (Port Authority for Rosslare Europort) and Rosslare Europort General Manager Glenn Carr welcomed local, national and international industry and government representatives to the port, including Minister of State at the Department of Justice James Browne TD. Stakeholders discussed plans to make this vision a reality, and the economic and environmental potential the ORE industry holds for the South East region.

The Offshore Renewable Energy hub plan represents an investment estimated at €200 million, and will be aligned with existing developments such as:

In total, these developments and the ORE Hub plan will see a total of €350 million invested in the port and its environs.

Ireland represents one of the best ORE resources in Europe, with a sea area of 490,000sq kms.  Rosslare Europort is ideally positioned to serve the many Offshore Wind developments planned in the Irish and Celtic seas, the majority of which are located within 100 nautical miles of Rosslare.

The national Climate Action Plan targets five gigawatts from ORE by the end of 2030, and Rosslare has unmatchable advantages to support this, and act as a new sustainable hub for the South East. These include:

To ensure Rosslare Europort can deliver its vision, the significant works required would include:

The ORE specific works would be in addition to those already outlined in the Rosslare Europort Infrastructure Masterplan which is set to transform the physical infrastructure of the port.

Rosslare Europort is already working to be Ireland’s ORE hub:

Jim Meade, Chief Executive of Iarnród Éireann said “Rosslare Europort has been to the forefront of our national response to some of the most critical issues we have faced in recent times. Working with State Agencies, Rosslare prepared for and responded to Brexit, transforming our direct connections to the continent of Europe. In recent weeks, we have ensured the rapid and successful establishment of reception facilities for Ukrainian refugees arriving to our shores. Now, as we face the urgent need for decarbonisation and to ensure energy security, the board and management of Iarnród Éireann fully supports the ambitions of Rosslare Europort to be Ireland’s ORE hub.”

Glenn Carr, General Manager, Rosslare Europort said “we have engaged extensively at European, national and regional level to understand the needs of the ORE industry. It is clear that not only is Rosslare Europort uniquely placed to support the development of the industry, but that this development can be a transformative one for the South-East region. In terms of economic potential, the South-East can be to offshore renewables what Dublin’s silicon docks are to the tech sector. The support shown by stakeholders to date, and here today in the terminal building, shows that we can achieve this as a region for the nation.”

Rosslare Europort as Ireland’s ORE hub will establish this renewable energy hub in a dynamic and growing region delivering:

Ireland South East is the most connected region in Ireland. It is:

Port of Waterford has joined with Rosslare Europort to support the Rosslare ORE Hub ambition. With one of Irelands most modern terminals handling a range of cargoes, adjacent landbanks zoned to accommodate new and existing port related businesses, and strong rail and road connections, Port of Waterford is positioned to support many of the prospective offshore wind farm locations in the Irish & Celtic Seas, centred on the Rosslare ORE Hub.