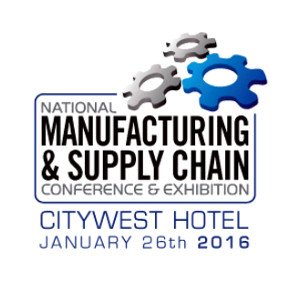 As a speaker at the National Manufacturing & Supply Chain Conference and Exhibition which took place at the Citywest in Dublin on 31 January, my talk focused on the opportunities for exporters based in Ireland to sell and ship to markets other than the UK, and for importers to source and import products from elsewhere.

Brexit was very much the dominant theme of the Supply Chain elements of the presentations that day, with the subject also taking up most conversation time with exhibitors and others attending. It is certainly scary that the Brexit negotiations schedule requires all of the “i’s” to be dotted and the “t’s” to be crossed before the end of this October, and that whatever slippage might be negotiated in the form of a “Transitional period” is likely to run only up to the end of 2020, at the latest. The conversations here are quite unlike what I have been hearing from people involved in the logistics sector who have attended meetings in Britain, where the Brexit word never seems to be mentioned.

On its stand at the Conference, Rhenus Logistics, which is an active partner in the Irish Exporters Association (IEA) Supply Chain activity, distributed copies of its simple to understand rates schedule for less than container load cargo on Asian services. The idea here was to get visitors to look to markets further afield and to demonstrate that the Supply Chain for these markets does not have to be either expensive or very complex. This positivity was also reflected in conversation with Alan Wilkinson, who is Managing Director of what used to be Interocean, but is now renamed Albatrans (Irl) Ltd. Through the overall Albatrans Group is a Drinks Industry specialist, Alan’s team, in addition to making their expertise available to established and new entrant Irish firms in this industry, are also seeking to help firms in other sectors setting out on their export journey.

This positive approach was very much a key feature of remarks from Paschal McCarthy, formerly Chief Executive of GE Healthcare and past-President of the IEA. For him, the major thing that holds Irish people and businesses back is a lack of positivity. This is not only in direct respect of the business but in our whole news and conversation obsession with how bad things are in Ireland, and our daily national crisis headlined on TV and other news outlets. “With that sort of attitude prevailing, why would any company want to do business with an Irish company, still less set up a business activity here?” he stressed. With Paschal based in Cork, it is hardly surprising that he would add a rider to that sentence; “Still less outside the Greater Dublin area.”

Paschal could well have a point and maybe a bit of media positivity would enable Ireland Inc. ride out the Brexit, ongoing Trump issues and other storms. I felt, though, that his view was not entirely shared by Trevor Dumbleton and his Quality Freight team. James McDonnell, who runs the Ireland West Airport Knock Express Cargo business spoke at its stand at Citywest about the firm’s considerable success in building trade from that Mayo base. Its foundation was created from solid support from manufacturers throughout the region who would prefer to, to borrow a phrase, “Shop Local”.

Also optimistic was Robbie Phelan of the Transland Group. At the moment almost, all of its Palletways/PalletXpress activity runs through Britain with much of it going onward to Europe. He foresees that in a Brexit situation it could switch the non-British business onto direct services to the continent rather than land bridge. The key to doing this stems from building from volume growth and this may involve a greater degree of cooperation between competing carriers. Interesting, by the way, that the IATA air cargo figures for 2017 have just been published and show that cargo volumes carried by European airlines grew by 11.8% – double the rate of capacity growth. It indicates perhaps, that in the event of land bridge difficulties, switching cargo to airfreight might not be a simple option.

The conversations at Citywest went on into the late afternoon and it will be interesting to see if attendees at the Multimodal Exhibition being held at the NEC, Birmingham in May are any different.