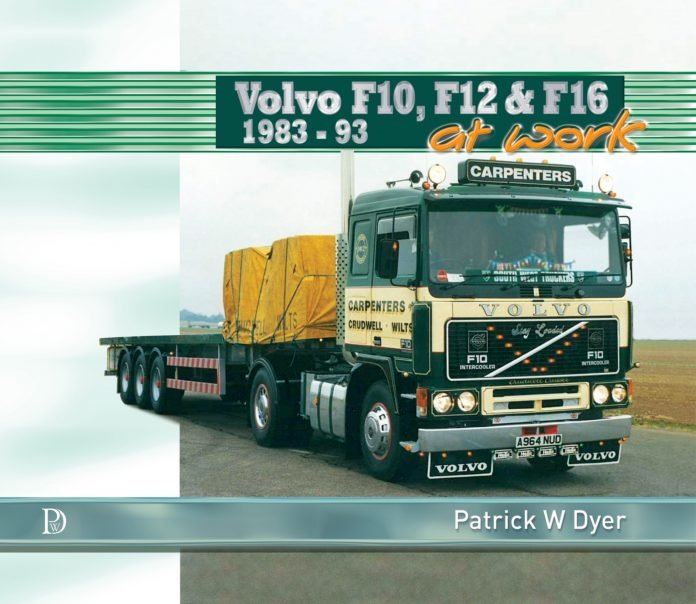 By coincidence during 2021 when Ireland was celebrating the fiftieth anniversary of Volvo Trucks entering the market, that Patrick W Dyer released his latest book featuring popular models from the Swedish manufacturers from within that era. The self-published 144-page hardback titled: ‘Volvo F10, F12 & F16 1983-93 at Work’, is the latest and final chapter chronicling the now iconic Volvo F trucks history.

Although it covers a particular decade of Volvo Trucks’ customer ownership and operations from the early 80s & 90s, it was this generation of trucks that firmly established Volvo as a leading truck brand in Ireland and a solid reputation that the Gothenburg headquartered company it still enjoys today.

Starting with the significantly redeveloped High-line trucks launched in 1983, the book charts the ongoing development of the F10 and F12 through the following years to the introduction of the F16 and the ‘Volvo Power’ F10 and F12 models in 1987. Modifications and developments, such as EDC and Geartronic, which occurred up to the introduction of the FH range are also documented.

From the selection of 200 photos featured, the detail added in each caption is in depth and intriguing.

“This hardback book is lavishly illustrated with over 200 period photographs from the Volvo Historic Archive, transport companies and dedicated enthusiasts, all supported by knowledgeable introductions and detailed captions in the author’s familiar and easy style”

Fans of Formula One Grand Prix Racing will appreciate the special F12 transporter tractor-units sporting the colours of the famed JPS Team Lotus and Camel Team Lotus. Incidentialy, Volvo Trucks was the official transport supplier with a fleet of flagship FHs to McLaren Formula One for a number of years, up until the end of last season.

Next time at a truck show, look out for these F10, F12 & F16 vintage models, armed with the abundance of interesting information as detailed in Patrick’s book.

*Patrick advises that it would probably be cheaper for those in the EU to purchase via Willem Kuyper’s wwwtransportboek.nl