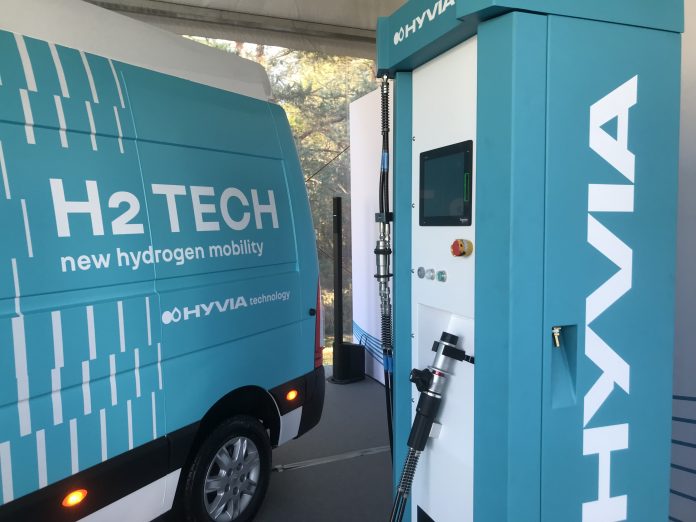 At Mortefontaine, near Paris, HYVIA, the Renault Group & Plug Power partnership further demonstrated its objective and passion for a cleaner future, by unveiling the Renault Master Van H2-TECH prototype to members of the International Van of the Year jury, alongside its Hydrogen Refuelling Station prototype as it looks to deploy its own entire hydrogen-based ecosystem, including green hydrogen production and distribution, and a range of fuel cell-powered light commercial vehicles.

Renault Master Van H2-TECH prototype
Available from 2022, the all-new Master Van H2-TECH offers zero CO2 emissions*, increased range, and fast refuelling time and is designed to transport goods and packages with ease thanks to its 12m3 cargo volume and a range of up to 500km. Thanks to these attributes, the Master will easily meet the needs of businesses, large accounts, fleets, and local communities.

Today, hydrogen mobility as a range extender is particularly useful for Light Commercial Vehicles: perfect for high loads and intensive use.

Built in France
The Master Van H2-TECH is equipped with a 30kW fuel cell, 33kWh battery and four tanks containing 6kg of hydrogen combined and is produced entirely in France.

The van itself is built at Renault’s Batilly plant, while electric and hydrogen integration is completed by PVI, a Renault Group subsidiary based in Gretz-Armainvilliers. The electric motor is produced at the Cleon plant, while the fuel cell assembly will begin at the Flins plant by the end of 2021. The hydrogen tanks are sourced from Faurecia.

The way the refuelling station operates is simple – hydrogen supplied will either be generated on-site using water electrolysis or supplied in bulk using gaseous tube trailers. The system then compresses H2 into storage, before dispensing it into the vehicle when needed.

The fuel stations will also be assembled at the Flins plant in Northern France.

Unique and complete HYVIA ecosystem
These prototypes are a first illustration of the HYVIA ecosystem, including green hydrogen production (electrolysers) and distribution (Hydrogen Refuelling Station), with a range of fuel cell-powered light commercial vehicles (Van, Chassis Cab and Citybus), that are complementary to battery electric vehicles.

More prototypes currently being worked on include the Master Chassis Cab H2-TECH: a large van with even more cargo space (19m3) and a range of around 155 miles (250km).

In addition, the Master Citybus H2-TECH is an urban minibus that can carry up to 15 passengers, ideal for businesses, municipalities, and local public services, with a range of 186 miles (300km).

*When driving, neither CO2 nor other regulated air pollutants, in accordance with the WLTP certification. 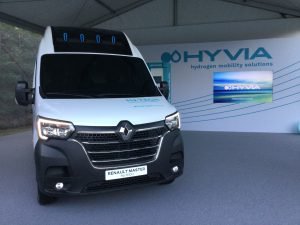 About HYVIA
“HY” for hydrogen, “VIA” for road: HYVIA paves a new way forward for carbon-free mobility, with hydrogen mobility solutions. Created in June 2021, HYVIA is a joint venture equally owned by Renault Group and Plug Power, a world leader in turnkey hydrogen and fuel cell solutions.

Based in France, for European markets, HYVIA offers a complete and unique ecosystem that includes light commercial vehicles with fuel cells, hydrogen refuelling stations, supply of carbon-free hydrogen, services for financing and maintenance of fleets.

About Plug Power
Plug Power is building the hydrogen economy as a global leading provider of comprehensive hydrogen fuel cell turnkey solutions. Plug Power has deployed over 50,000 fuel cell systems, designed, and built 110 refuelling stations that dispense more than 40 tons of hydrogen daily, and is a technology leader in green hydrogen solutions via electrolysis.

Present in Europe for more than 10 years, Plug Power has significant references in hydrogen mobility with key European industrials, logistics customers and vehicle manufacturers. Plug Power installed several PEM technology electrolysers in Germany, France, The Netherlands, and Portugal. The company has deployed more fuel cell systems for electromobility than anyone else in the world.