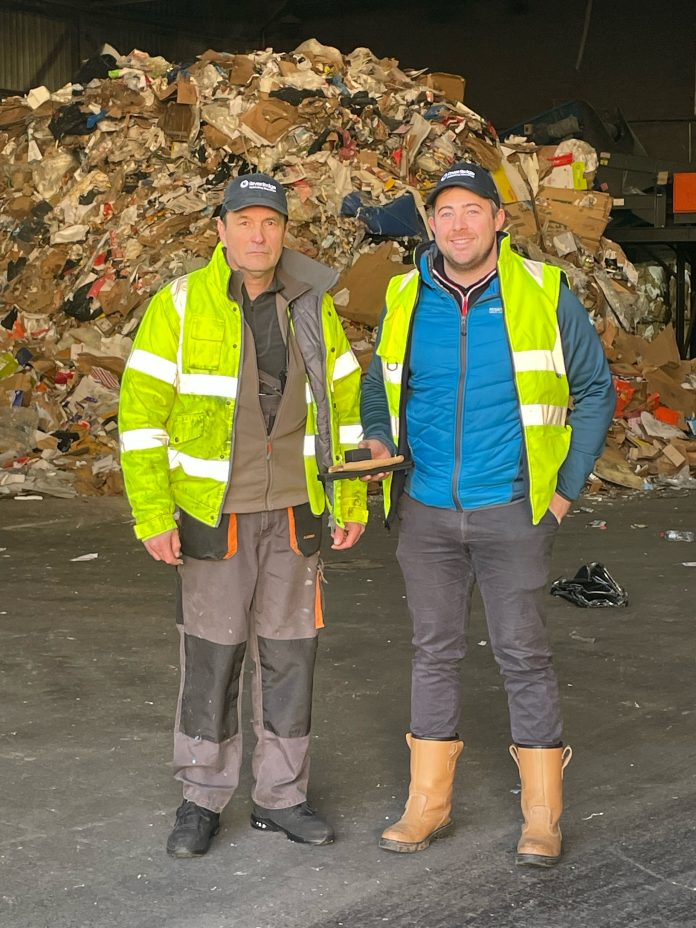 WASTE Management company, RiverRidge has helped to reunite a Scottish tourist with her beloved jewellery collection, after it was mistakenly disposed of as rubbish and taken on a round trip across Northern Ireland, before being found by the company’s dedicated waste process operators at its Materials Recovery Facility (MRF) in Mallusk.

Retired schoolteacher, Kathleen McKimmon and husband Eric, from Cupar, near Fife, had planned a relaxing trip to Northern Ireland earlier this month, however the trip ended up being anything but, when her husband unknowingly put Kathleen’s jewellery collection of huge sentimental value, which included six necklaces, three rings and a charm bracelet, in a waste bin.

Speaking about the ordeal, Kathleen said, “We were looking forward to our post-Christmas trip to Northern Ireland, visiting friends and family, as well as finding out more about my husband’s family history. As a result of a break in at our home a few years ago, where my complete jewellery collection was stolen, I took my jewellery with me, disguised in a plastic bag. Following a trip to Belfast from where we were staying in Omagh, we made a stop at Sprucefield, where my husband offered to dispose of the litter – which included the plastic bag, without realising its contents.”

It wasn’t until Kathleen went looking for her jewellery the following morning that she realised it wasn’t in the car. After a frantic search, the couple realised that the jewellery had been thrown out during their stop at Sprucefield.

Kathleen continued, “When we realised what had happened, we drove back to Sprucefield to see if there was any chance of retrieving the jewellery but as expected, the bins had been emptied. At this stage, I had lost all hope of ever being reunited with my jewellery collection again.” But all was not lost.

After speaking with John McGuigan at M&S, Sprucefield and contacting the Centre Manager, who said there was a possibility of stopping the process before it was too late, Kathleen was put in touch with the team at RiverRidge.

RiverRidge is Northern Ireland’s leading waste management company, collecting waste from all parts of the region. In most instances, all waste is processed on the day of collection at one of the company’s three MRFs, so it is very rare to find anything that someone mistakenly throws away.

Senior Commercial Manager at RiverRidge, Pamela Jordan said, “When I received Kathleen’s email on Monday morning, I knew how distressing this must have been for her. However, given the nature of our business and the large amount of waste we collect, we were unsure about what the outcome would be.

“We always try to accommodate as best we can though, and after contacting our Operations Manager at the Mallusk facility, Danny McErlain, the team got to work – literally on their hands and knees seeing if any of the jewellery could be recovered.”

At this point, Kathleen and Eric had arrived at the ferry port, and were waiting to board the boat for their return to Scotland, resigned to the fact that the jewellery was gone. “I had accepted that the jewellery was lost, and I was devastated. That was until, like divine intervention, I received a call from Pamela telling me that the plastic bag containing my jewellery had been found. I couldn’t believe it, I was elated.”

Kathleen says it is a miracle that the jewellery was found, and that this experience has renewed her faith in human kindness. “I am so grateful to everyone who helped out along the way – from the team at M&S Centre, Sprucefield, to Pamela, and all the team at RiverRidge who went above and beyond to retrieve the jewellery. Everyone was so incredible.

“We hear so many stories about unhelpful people and poor customer service, but rarely about the good. On this occasion, nobody could have been more helpful, comforting and reassuring. My sincere thanks to everyone who was involved.”