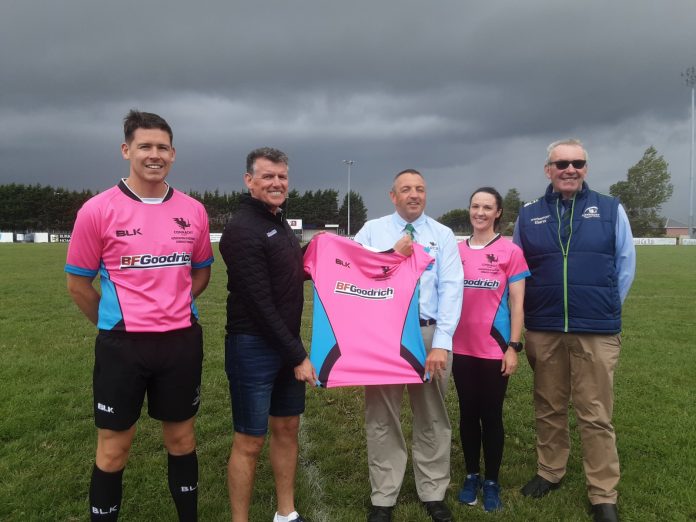 BFGoodrich has inked a two-year sponsorship agreement with Connacht Rugby to drive the recruitment of referees, in the tyre brand’s first venture into team sports in Ireland.

The first-ever corporate sponsorship for the provincial rugby team’s referee development programme sees the BFGoodrich logo emblazoned across the pink jerseys of more than 80 refs who officiate across the senior and junior leagues.

Joe Gorham, Head of Rugby Development at Connacht Rugby, says: “Everything we do at Connacht Rugby is about people and place. We are an ambitious club and in BFGoodrich we have a strong brand which is aligned with our values and is a good fit for the rugby community.

“We want the highest quality referees we can get. The sponsorship with BFGoodrich has allowed us to create a development fund to help in the recruitment and retention of referees who are vital for the growth of Connacht Rugby.

“We see this sponsorship as the entry point to a much stronger relationship in the future.”

The sponsorship deal will raise the profile of BFGoodrich and Kevin Burke Tyres (KBT), which is the wholesale supplier of the brand’s tyres across the whole of Ireland.

Michael Goode, B2C Country Manager for BFGoodrich, says: “We have previously sponsored motorsport in Ireland but we wanted to try something different to achieve better exposure of the brand across the country. Rugby fans in Connacht are a good target demographic for the BFGoodrich tyre range sold by KBT.

“We expect the investment to be more beneficial than any sponsorships we have had locally in the past.”

He adds: “Connacht Rugby is growing fast, with plans for a new 12,500-seat stadium and training facilities – and we want to grow with them. On any weekend during the season, more than 80 referees are officiating games over a large portion of the west of Ireland, which is a great billboard for BFGoodrich.”

In 2021 Kevin Burke Tyres formalised its distribution partnership with BFGoodrich, signing a three-year agreement to supply BFGoodrich tyres across Ireland until at least mid-2024 – with the option to extend for a further two years.

KBT stocks the full range of BFGoodrich car, van, SUV and 4×4 tyres in the firm’s warehouse facility in Athenry, County Galway, and offers next-day delivery using its own fleet of vehicles. It already supplies more than 40 sub-dealers across Ireland.

The BFGoodrich brand is widely recognised as a world leader in off-road tyres, having first started manufacturing in Akron, Ohio, in 1870.