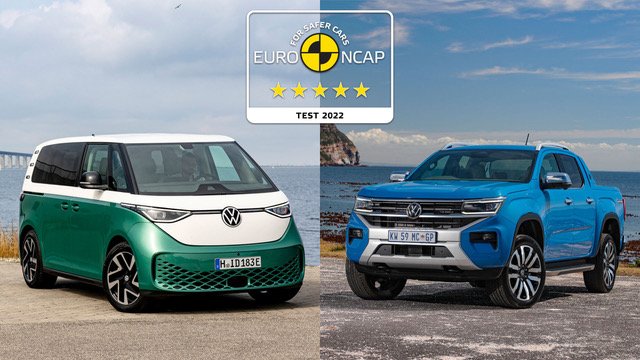 With the ID. Buzz and the new Amarok not one but two models from Volkswagen Commercial Vehicles with completely different technical designs were rated ‘Very good’ – and each received the top ranking: ‘5 Stars’.

The new ID. Buzz, has already won many prizes and awards within just weeks of its launch. These have now been added to with another award: five stars for vehicle safety, given by Euro NCAP.

This equates to an outstanding overall score both for collision and occupant protection, and is a mark of good vehicle features incorporating both extensive and practical accident avoidance technology.

The ID. Buzz is equipped as standard with driver, front-seat passenger, centre and side airbags in the cockpit, plus curtain airbags. Scoring 92 percent of the maximum possible ratings points for occupant protection, the electric MPV from Hannover achieved an excellent result thanks to the combination of the airbags with the appropriately laid-out vehicle body structure.

As in the case of the ID. Buzz, here too it was the combination of a robust vehicle body structure with a multitude of modern assistance and emergency braking systems that led to this award. The pick-up even has knee airbags. The very good scores for the front and side crash tests with the Amarok were achieved in combination with the VW-specific child seats.

Euro NCAP also gave a top score for accident avoidance. At the driver’s disposal in both the ID. Buzz and the new Amarok are numerous standard specification and/or optional assistance and emergency braking systems, which likewise impressed the testers. In the ‘Safety Assist’ category they helped the vehicles to achieve 90 per cent (ID. Buzz) and 84 per cent (Amarok) of the possible ranking points.