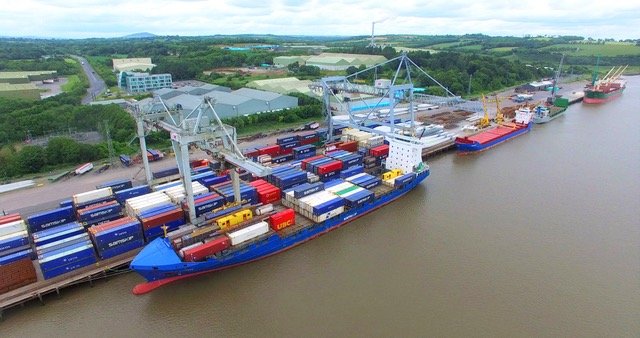 On last Friday, 28 May, the container vessel Edith made her first call to Waterford, inaugurating a significant development of the five-month-old Dublin/Amsterdam service which had, up to then, been operated using a significantly smaller vessel. The 750 TEU Edith will sail from Waterford each Friday morning reaching Amsterdam over the weekend, returning to Dublin on Wednesday and Waterford on Thursday evening. Samskip will also maintain the existing Ireland/Rotterdam schedule in which it cooperate with DFDS Logistics, with Waterford calls on Tuesday and Friday.

Thijs Goumans, Head of Ireland Trade at Samskip commented on the developement: “We have experienced strong uptake for the direct route into Amsterdam’s network of rail, road and barge connections to major EU markets. As anticipated, customers linking to Ireland have been eager to avoid the post-Brexit hassles of UK distribution. Waterford can expect the same seamless connections.”

The Waterford call schedule will link seamlessly with the Ballina/Waterford rail service being re-established later in June by Forwarder XPO Logistics giving North-West located exporters a low-carbon supply chain running through Samskip’s European hubs. In this context the Amsterdam routing gives access to a wide range of rail and river services through Duisburg including rail services into China. These services now operate on a high-frequency basis and offer a door-to-door transit time of approximately half that achieved by normal container shipping services from European ports. Due to the rapid inflation of Seafreight costs on these and other Deepsea shipping routes, the cost of shipping using rail-based services has become extremely competitive.

In addition to a significant of traffic to lower carbon distribution systems using rail and barge, Samskip has also been very active in developing the use of biofuel in its services. The Container vessel Samskip Endeavour which sails on the Ireland/Rotterdam service now operates on biofuel, while the company has launched a pilot distribution scheme for haulage services operated from its Amsterdam terminal on behalf of Unilever. The company says that such fuel is not only beneficial for the local air quality but is also good for the truck’s engine, as filters and injectors stay cleaner longer and need to be replaced less often. Howard Knott