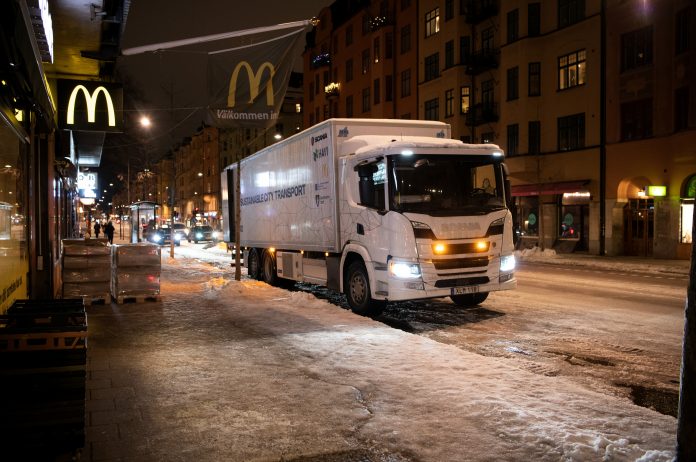 A pilot study to test silent overnight deliveries has been introduced at six McDonald’s restaurants in Stockholm, Sweden using a hybrid truck from Scania and operated by HAVI.

Heavy duty commercial vehicles are normally restricted from driving in Stockholm’s city centre at night, due to noise. Instead, delivery access often happens when shops and restaurants are preparing for the start of the day’s business – during the morning rush hour.

To minimise delivery trucks getting stuck in traffic or causing queues, the city of Stockholm is now broadening its pilot study of overnight deliveries. The deliveries using silent electric powered vehicles are a cooperation between the city of Stockholm, HAVI, KTH, EU, McDonald’s and Scania. The initiative is taking place in the framework of the EU project: Eccentric Stockholm.

A chargeable hybrid truck from Scania that is run with a combination of electricity and fossil free fuel (a type of biodiesel called HVO), which dramatically reduces the emissions of particles and carbon dioxide, is being used in the trial. The plug-in hybrid truck is also connected and fitted with geofencing technology. This means that it adapts itself to the driving conditions in a predetermined area. These virtual traffic zones can determine which motor the vehicle will use and adapt its speed to actual speed limits, providing excellent possibilities to reduce emissions, noise and other distractions in city centres.

“HAVI is a global logistics provider to McDonald’s worldwide, and in Sweden the two businesses have been working together since 1989. “We are very proud to be part of leading efforts to tackle real issues facing people living in the city,” said Camilla Eklöf, Quality, Safety & Environmental Manager, HAVI. “These trucks drive quietly and are emission-free in these sensitive urban areas. At the same time, however, they are still capable of driving longer distances. Our global partnership with Scania and McDonald’s is really making a difference to the environment as we work together to minimize emissions.”

The hybrid truck can drive in silent electric mode for up to 10 kilometres and can efficiently deliver goods on practically empty streets at night. The consortium behind the project will study how much of an environmental benefit is gained by not having trucks in traffic queues and by always having good accessibility.

“This kind of innovative partnerships and frontrunner projects are just right for us on journey towards a more sustainable supply chain. We were early out in Sweden implementing charging stations for cars and this is an exciting next step,” said Henrik Nerell, Environmental Manager, McDonald’s in Sweden.

The battery is charged by external power sources and via regeneration, which means that the truck’s movement is turned into electricity each time the brakes are used. Thanks to an electrical charging station near one of the restaurants, the truck will be able to charge its battery while loading, unloading, and during driver breaks ensuring that it will not lack access to electricity in the city centre.

On the longer routes between the city and the warehouse that the truck leaves from, the vehicle can run its internal combustion engine on HVO which can achieve up to a 90 percent reduction in emissions. The truck changes over automatically to quiet and emission free electric power with the help of the software tool Scania Zone and virtual fences or geofences, upon arrival in environmentally sensitive urban areas.