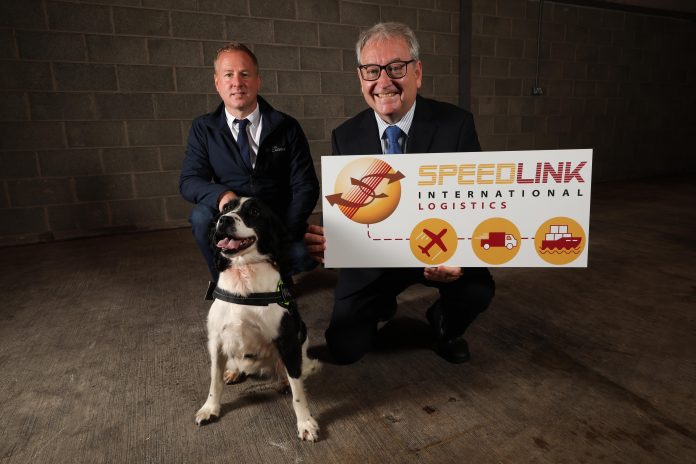 A new Free Running Explosive Detection Dog (FREDDs) Service that will save both valuable time and money for local exporters has been launched by Speedlink International Logistics in Belfast.

This is the only service of its kind on the island of Ireland, and it is estimated to shorten the process of screening and shipping dense cargo by up to three days.

The FREDDs service operated by Speedlink International Logistics, which has operated in the freight forwarding industry for over 30 years delivering a combination of Air, Sea and Road transportation, is approved, and regulated by the UK Civil Aviation Authority.

David Rogers, Director at Speedlink International Logistics, said: “The vast majority of all cargo leaving Northern Ireland requires screening. However, significant tonnage of large, dense cargo does not leave Northern Ireland on time as it is fails screening or is simply unable to be screened.

“Consignments therefore have to be broken down and rebuilt requiring additional labour at an extra cost and the shipping process is then delayed by several days. Goods are then late which has an impact on the entire supply chain.

“The CAA estimates FREDDs, which can screen approximately 100 tonnes of cargo an hour, achieve a 98% pass rate significantly reducing the likelihood of any delays to the shipping of goods.

“We are always looking for the most time and cost-effective ways to transport cargo, and the FREDDs remove the most stressful, problematic stage of the supply chain for our customers.

“Feedback has been very positive with demand from across Ireland, and we would expect a further uplift in the coming weeks as we enter the busiest quarter of the year.”

Speedlink International Logistics expects further uptake of the new FREDDs service which will lead to job creation. The service is already being utilised by local companies including AB Cargo.

Tony Budde, Managing Director of the firm, said: “Due to the large number of manufacturing and engineering companies in Northern Ireland, there is a high volume of dense cargo coming out of the region on any given day.

“When a container or pallet cannot be screened, the knock-on effect is troublesome. Aside from the delays and additional costs, it can result in damage to the goods, paperwork becoming obsolete, and ultimately a disrupted supply chain and unhappy customers.

“We have been using the FREDDs on behalf of a number of customers in recent weeks and it has really revolutionised the process. All shipments have been screened in record time with a 100% first time pass rate and have therefore left Northern Ireland on time and with no surprise costs.

“On occasion we have previously shipped items to various parts of Europe for FREDDs screening which can still be quicker than if consignments have to be broken down for secondary screening to leave Northern Ireland. Therefore, having the service delivered by a local company right here on our doorstep is really a gamechanger for us in terms of time and cost efficiencies whilst also reducing the overall carbon footprint of the goods.”