Home Breaking News Summaries of Contributions by Guest Speakers at the Regional Development conference in... 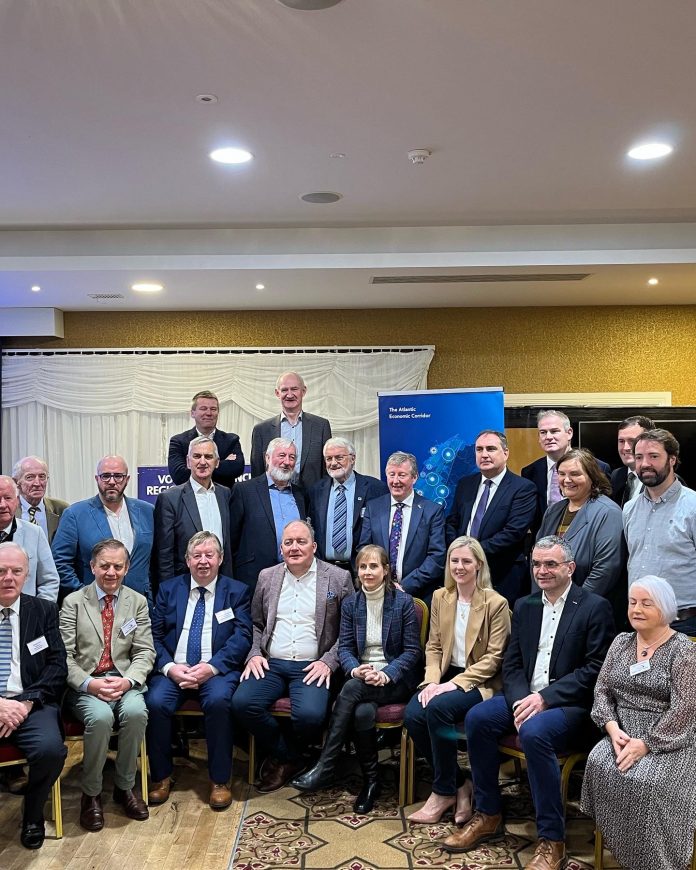 Action Tuam Chairperson Ronán Long welcomed an audience of over 250 people from Derry to Kerry and overseas. Public representatives attended in large numbers and there was strong representation from multi-national and indigenous business, and freight interests.

The population of Tuam and the wider outskirts has almost reached the ten-thousand mark and we have a catchment of 35,000 making us the largest settlement town in the county. Business in most sectors has bounced back strongly from the effects of COVID and we are now attracting young highly-qualified people from all over the world to fill lucrative contracts in Tuam and all over Galway. Many of those coming to Tuam have high expectations in terms of securing employment contracts, affordable housing prospects and a better quality of life.

Our own children attending third-level institutions in Galway, Athlone & Dublin have high expectations also. They expect to have access to sustainable transport to bring them from their homes to the cities. Surely, they deserve to have access to our existing regional infrastructure that can transport them to our regional capital of Galway city as well as our capital city and beyond? They should be entitled to the same facilities as their counterparts on the other side of the country.

Rail enables large numbers of people to be movedefficiently and effectively into and out of these centres. In addition, for rural communities, rail provides an important link for residents to reach services and facilities in neighbouring towns and cities, addressing issues of economic and social exclusion and bringing vital tourism spending into their local economies.

For this reason, the Northern and Western Regional Assembly has advocated strongly for the enhancement of rail infrastructure in region.

• In the age of Mobility, airports need to be connected to cities and regions by different transport modes (car sharing, taxi, bus, rail, cycle and other mobility services) to successfully compete and grow business
• Rail connectivity into the Airport and SDZ zone will also be a critical enabler to future growth in international access with airlines and passenger growth as well as providing additional low cost efficient connectivity for both passengers and freight.

The AEC primary objective is the sustainable economic development of the Western regions; from Derry to Kerry. Its goal is to increase the contribution to the national economy by 3 to 4 times the current level. This will bring the GVA (Gross Value Add) per person from half the national average to the national average. To achieve that the population needs to double, mainly in the 20 – 50-year-old demographic category. The AEC seeks to increase enterprise and industry investment in the regions, not just in the larger urban centres, but within smaller urban clusters. Clusters are sitedclose to a single infrastructure backbone giving a “city of scale” effect. Other forms of clusters may derive a comparative advantage from a sustainable natural resource such as energy, Agri/food, tourism or the marine.

This form of cluster development will achieve urban density while maximising on the investment in education and social amenity. Most importantly, it will scale and increase footfall for smaller business to survive and grow.

1. Firstly, it requires a shift away from a reliance on social dependence to a balanced socio – economic program that is citizen centred i.e. a favourable environment for social and community enterprise including community financing. It must also provide international investor certainty, with large infrastructural projects led by government.
2. Secondly it requires an integrated infrastructure policy that maximises existing infrastructure investment and is future focused.

The AEC strategy on infrastructure is a simple one. It creates a backbone that maximises population density by linking urban and inter urban clusters. It maximises infrastructure capacity by enhancing existing road and rail opportunities and links to key sea and air assets.

It seeks to integrate and develop service and utility networks and where practical integrating energy, communication, and transport networks to maximise the use of public assets.

The AEC strategy also proposes state led investments of scale, such as the potential Shannon Estuary project. Such investments would be characterised as having significant regional economic effect in terms of high value employment, and low carbon footprint. Such opportunities will have comparative global advantage and will be attractive to international mobile investment.

The successful development of the Atlantic Economic Corridor depends largely on the political ambition and commitment to achieve real regional balance. There is a real and present opportunity to develop the corridor with its natural resource comparative advantage and current investor interest. Its success, however, will depend on our collective commitment to transform our economic and infrastructure planning process. A failure to do so will be a failure to realise an abundant economic growth opportunity, a failure to respond positively to climate change but most importantly a failure to provide for future generations.

• Roads are needed.  But rail, sea and air transport need to be integrated into regional strategic planning if regional economies are to be revitalised.
• The N&W region now has an international airport that will play an ever-deepening role in development of tourism as well as business.
• The poor quality of harbour facilities on the NW Atlantic coast eliminate prospects of building new sustainable energy generation.
• Much of the rail system in the N&W region languishes in a derelict state.  The EY versus WoT WRC report debacle was a signal that all is not well in the approach of Irish public administration to regional development of rail.  This needs to change.
• There is a dearth of solid data and informed analysis of how county economies perform.  Until this knowledge gap is addressed, regional strategies will not be successful in reversing the relative decline of the N&W region.

For the entire west coast of Ireland, from Kerry to Donegal, Balanced Regional Development is no longer an optional extra but an urgent necessity.

Only through the provision of sustainable infrastructure, delivering enhanced inter-regional connectivity and increased economic activity, can we secure the sinews of war that are critical to fighting the battle to redress regional inequality and progress the Atlantic Economic Corridor.

The latent or suppressed demand that reflects changes in society in recent years must be recognised. This includes a massive increase in third-level student travel, and an upsurge in commuting and travel for medical appointments. Rail is also the public transport gold standard for people who are mobility impaired.

For too long we have been held back by faceless and unelected people, who seek to obstruct and undermine the attempts of our democratically elected representatives to make progress for the regions. A typical example is the NTA’s ‘Connecting Ireland’ consultation paper which prejudges the expert deliberations of the forthcoming All Island Rail Review by pronouncing that “bus based public transport is the appropriate mode for the West of Ireland”

Is it now time that we had a decentralized Department of Regional Planning to serve the areas of this country that are most in need?

The presence here today of representatives from over 60 towns is a clear and unambiguous statement that we have had enough delay and obstruction from the centre. Twice in the past two years, the European Union has made it explicitly clear that our region is lagging behind – in their words – and that over-centralized, Dublin-centric planning is the reason.

The battle to develop the Western Rail Corridor – a Green, Smart, Inclusive and Sustainable critical spine of state-owned infrastructure running through the very heart of our region – has come to symbolize this malaise. If we cannot develop the assets we have what hope is there for the future?

In that context, we need to be clear that our disused railways in every part of this country are ‘national’ assets and utilities. In the battle to provide sustainable solutions to climate change, energy shortages and rural decline, the only proper function for such critical infrastructure must be to bring it back into use to serve the needs of the people. So for example, the commuter town of Tuam with a population of almost 10,000 people has a rail link to Galwayand Mayo lying out of use  and derelict. As the late John Healy advocated, we are shouting stop. This railway must be renewed and train services reinstated without further delay.

This is what West on Track has been about and will continue to be about until the Western Rail Corridor is re-opened to passenger and freight traffic all the way to Sligo. Not only that, our ambition as a region must also look to similar development in the northwest , in County Donegal and on to the City of Derry. This is what true vision and All Island regional planning requires.

Recently, we saw the welcome announcement that the rail link to the TEN-T Core, Tier 1 port of Foynes is to be restored. It will not have escaped your notice that this is also part of the Western Rail Corridor and a traditional cargo port for the West of Ireland.

The logical next step must be the reconnection of North Galway and Mayo to our regional capital, Galway, and the Euro Ports of the south, “plugging in” the substantial towns of Tuam, Claremorris, Ballina, Castlebar and Westport for commuting and freight traffic. Scoping for optimal route selection for the link to Sligo is overdue. Remember that Sligo is now officially designated as a Regional Growth Centre, and second only to Galway (in the southern corner of our region) in the NWRA settlement hierarchy.

The presence here today of such a strong cross-party group of political representatives, Oireachtas members and County Councillors, serves to underline the strong support that now exists for progress on this issue.

Our pledge to the communities represented here today is that we will not rest until those objectives have been achieved.