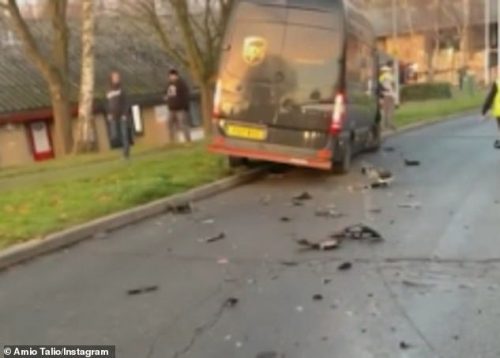 Lamborghini driver later explained he had been following a bend in the road when the UPS driver, who had not seen him, ‘came out of nowhere’ and hit him.

The value of Camera Telematics’ Street Angel to Crouch Logistics and the resulting digital camera footage was highlighted recently, when an accident occurred involving a Crouch Logistics’ vehicle (sub-contracted to UPS) and an Italian sports car valued in excess of £180K. Having the footage of the incident available from the Street Angel device, Crouch Logistics was able to prove that their driver was not at fault and therefore were not liable for what would have been a very expensive insurance settlement. Many insurers still insist on a 50/50 settlement in order to conclude a claim – so having footage of the event provides irrefutable evidence.

Commenting on the performance of Street Angel, Chris Crouch, Managing Director, Crouch Logistics said: “Our decision to install Street Angel on our fleet of vehicles has been completely vindicated by the performance of the Camera Telematics’ kit in determining who was liable for the accident – particularly as the Lamborghini driver contested that the UPS driver was at fault. Having accurate footage from Street Angel proved in court that the Lamborghini driver was liable for the accident. and that the UPS driver was in the clear.”

Once installed on a vehicle, Street Angel works by using 4G connectivity to continually record video evidence of the journey and the vehicle’s surroundings on to the internal memory. It uses sophisticated accelerometers to measure g-force in all directions to detect any impact or harsh event, i.e. braking, cornering etc. When the g-force parameter is breached the device instantly uploads a video clip of the event) to the cloud  (usually seven seconds leading up to the breach and 3 seconds after that) while generating an instant email alert to the fleet manager notifying them of the event. The email includes the date, time and vehicle registration, the location and type of event, such as harsh braking or cornering. The email also contains a link that the user can click on and watch the video straight away.

This data is accurate and admissible evidence, should it be required to defend or mitigate an insurance claim. And with the availability of a 360-degrees option ensures the maximum flexibility to monitor cargo, vehicle side, reversing and driver angles, and forward facing. Two hundred hours of footage using 5 x FHD 1080p channels is achieved with 2TB HHD.