Home Breaking News Thermo King’s Galway Production Line among the first in Europe to be... 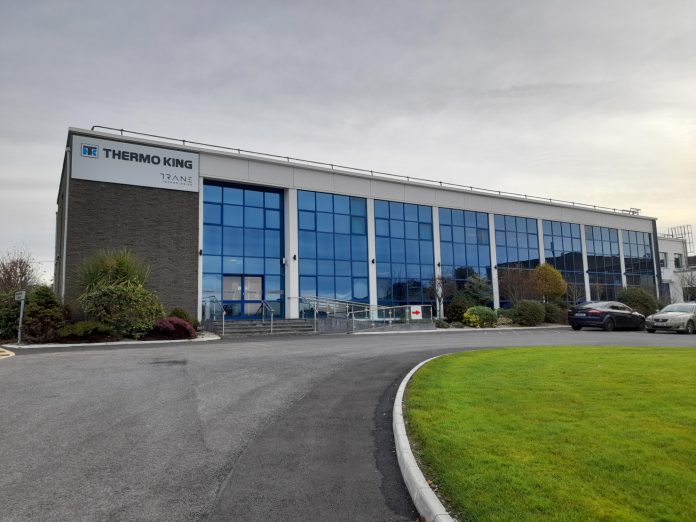 Thermo King’s manufacturing production line in Galway, Ireland, was awarded the ISO 14064-1 (Carbon Neutrality) certification from the National Standards Authority of Ireland (NSAI), the first in the country and one of the first in Europe. The recognition demonstrates the company’s path towards their 2030 Sustainability Commitments, which includes leading by example in achieving net-zero carbon emissions, zero waste-to-landfill, net positive water use in its own operations, and its Gigaton challenge to reduce customer emissions by 1 billion metric tonnes.

The Advancer A-Series trailer line, which was introduced last year, reduced energy used in its production processes by 60 percent over previous models. The refrigeration units are also 30% more fuel-efficient than the market average.The manufacturing line achieves carbon neutrality through a combination of efficiency measures and external carbon emission reduction initiatives. The award is based on greenhouse gas (GHG) emissions data across the entire manufacturing process including welding, e-coating, assembly and unit testing.

“The Advancer and the zero-waste-to-landfill plant in Galway reflect Trane Technologies’ commitment to a sustainable, carbon-free society,” said Francesco Incalza, President Thermo King EMEA for Trane Technologies.  “We are proud to receive this certification and continue to prioritize carbon neutral operations and producing energy efficient, clean technologies for heating and cooling buildings and transporting food, medicines, vaccines, and other critical goods. We challenge what’s possible today to accelerate progress towards a sustainable tomorrow.”

The company’s overall carbon emissions targets have been validated by the Science Based Targets Initiative (SBTi); it is one of only 47 companies whose targets have been validated twice. Trane Technologies’ plans include reducing product emissions by 50% in support of the Paris Agreement goal to limit global warming to 1.5 degrees Celsius, requiring net-zero global carbon emissions by 2050.