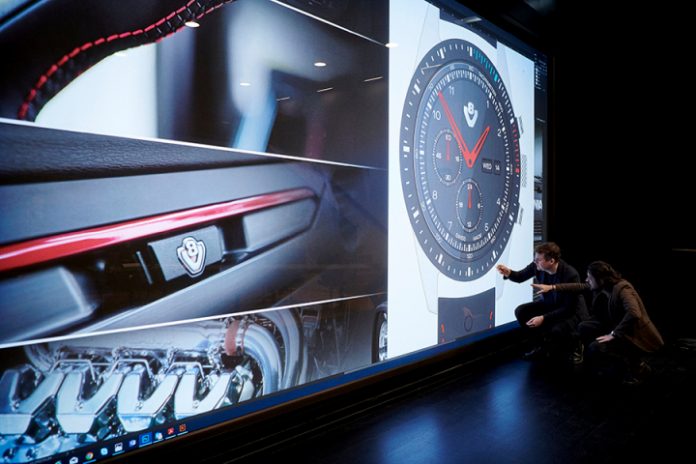 Scania has launched a special range of watches to mark the 50th anniversary of the V8 engine. The three different watches have been developed by Scania R&D designers, and those who wear them can expect to have a roaring time as the watches are inspired by details from the V8 truck.

The watches were designed from scratch, making it possible for the design team to style them after features of the real trucks.

“We could decide completely what details and design elements from the V8 trucks we wanted to highlight to get the proper V8 look and feel,” says Jesper Höglin, Product Manager at Branding Products.

“When we developed the V8 merchandise products, we wanted to emphasise the heritage and what the V8 represents today: power and precision. The V8 is a source of great pride to Scania and to those who drive it,” says Rudenstam.

He adds, “We have a refined exterior and powerful interior. Precision outside, power inside. Features that normally don’t fit together, but in the V8 they do. You get the power you need for a certain moment, combined with precision.”

The watch cases are designed with elements and angles taken from the V8 truck and its engine.

The first model is the ‘V8 Limited Edition’, a chronographic (display and stopwatch) high-end watch. It comes in a limited edition of 500, each one numbered on the back. Its black leather band and red stitching evokes the look and feel of the V8 steering wheel.

The model also has a timing feature and buttons on the side that are inspired by the V8 piston head, as well as a pattern with holes that is a nod to the V8 steering wheel. And the hands of the clock are the same as the speedometer needles. The Scania logo and V8 symbol adorn the watch face, while the Scania griffin is embossed on the rear.

The second model ‘V8 Black Edition’ is sportier. It has the characteristic red colour from the V8 truck’s styling kit included on the strap, which is also inspired by the timing belt in the engine. The rough surface of the bezel (the grooved ring that holds the cover of the watch face in position) is meant to emphasise the tough heart of the truck. The watch face is adorned with the Scania logo and V8 symbol, while the case back is embossed with the Scania griffin.

On the third watch, ‘V8 Metal Edition’, small Vs have been added around the clock face, emulating the shape of the V8’s logo. It has a sleek and sturdy profile and a subtle brushed metal finish. The watch movement is solar powered and can run for more than four months on just one charge.

Pride of the Province presented at Connacht Truck Show 2018

Renault Group’s Maubeuge plant in Northern France – A Centre of...