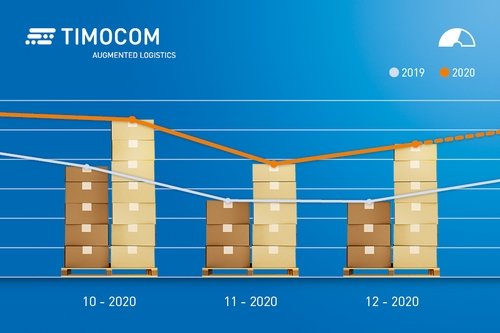 This was a turbulent year marked by the Coronavirus pandemic, but the final quarter ended with the best freight numbers so far. TIMOCOM’s transport barometer showed 9% more freight than in the third quarter of 2020. In total, the number of freight offers in 2020 rose by 8% as compared to 2019 – despite massive fluctuations caused by the pandemic.

The fourth quarter showed continued improvements in a year marked by the coronavirus pandemic. TIMOCOM’s transport barometer, calculated with freight input from 44 European countries, showed 9% more freight than in the previous quarter in 2020.

Although there were fewer freight offers in October (-4%) and November (-28%) as compared to September, which was an incredibly strong month (+70%), the industry once again showed significant recovery in December. The amount of freight increased once more by 18% as compared to the previous month. This growth is particularly notable, since December had almost 1.5 million more freight offers than November 2020. A striking amount, as things usually slow down during the last month of the year.

Better numbers than last year, despite the coronavirus

There were 53% more freight offers in the final quarter of 2020 than there were in the same quarter in 2019, even after taking the comparatively lower numbers in October and November into account. More than 10 million freight offers were entered in October 2020, for example, as was also the case in September of the same year. In addition, October, November and December show the biggest changes compared to the previous year across all of 2020. The percentage difference to the same quarter in 2019 looks as follows: October 43%, November 47% and December 76% more freight offers than in the same months in 2019.

Overall, TIMOCOM’s transport barometer shows high volatility paired with sometimes significant periods of recovery over the last year. One important contributing factor was the various phases of lockdown experienced throughout Europe. For example: freight offers for transport routes from Germany to France dropped by 84% in April and again in May by 67% as compared to 2019. The strict lockdown was lifted in mid-May, and as a result demand increased in June, reaching 16% more freight than the same month in the previous year. In total, the number of freight offers in 2020 rose by 8% as compared to 2019 – despite massive fluctuations caused by the pandemic.

The pandemic has also had a significant effect on individual routes between countries on TIMOCOM’s transport barometer. In general and following the European trend, December was a very busy month, ending the year on a strong note. There are some really notable examples, such as imports from Austria to Germany, which increased by an average of around 175% in the final quarter of 2020 as compared to the same quarter in 2019 (October 114%, November 235%, December 175%). The transport barometer also recorded strong growth in freight transported from Italy to Germany (October 58%, November 128%, December 139%). This is likely due to the drastic situation in Italy during the first coronavirus wave. In the second half of the year, however, trade between Italy and Germany got back on track. The transports that could not take place in the second quarter were made up for as the year continued.